There are several theories about how the Chincoteague Ponies came to exist on Assateague Island. The National Park Service, which controls the ponies on the Maryland side of Assateague, claims that the horses were brought to the island in the 17th century; however, the Chincoteague Volunteer Fire Company, which owns the ponies on the Virginia side of Assateague, claims that the horses are descended from Spanish horses who swam to the island from a shipwrecked Spanish galleon off the Virginia coast on their way to Peru in the 16th century. At some point after the ponies arrived on the island in the 16th or 17th centuries, pony penning began as a way for locals to claim, brand, and harness the wild herds.

By the 1700s, the pony penning was an annual event and unclaimed animals were branded or marked for ownership by groups of settlers. The first written description of the pony penning appeared in 1835, and by 1885, the event had become a festival day. The event consisted of two days of horse and sheep roundups on Assateague and Chincoteague Islands. Over time, the sheep population diminished and the pony population grew and eventually sheep penning was halted. In 1909, the last Wednesday and Thursday of July were designated as the annual days for pony penning. The penning took place on both islands, until a wealthy farmer purchased a significant portion of Assateague Island, which forced many settlers to move to Chincoteague Island. This necessitated a change in the pony penning format, and by 1923, all parts of pony penning except for the actual roundup had moved to Chincoteague Island. The ponies were transported by truck for the first two years after the move, before the annual swim was begun in 1925. 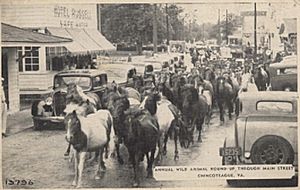 In 1922, a causeway was completed that connected the Chincoteague Island to the Virginia mainland. The Chincoteague Volunteer Fire Company was established in the same year, after a pair of fires ravaged the island. In 1924, the first official Pony Penning Day was held, where the foals were auctioned at $25–50 each to raise money for fire equipment. The fire department owns the herd, and holds a grazing permit from the U.S. Fish and Wildlife Service which allows the fire department to let the horses graze on the Virginia side of Assateague Island. The permit allows the fire department to maintain a herd of up to 150 horses. In 1927, the crowd of spectators was estimated to be approximately 25,000. The event was popularized by the book Misty of Chincoteague by Marguerite Henry, published in 1947. It now usually draws from 40,000 to 50,000 spectators. 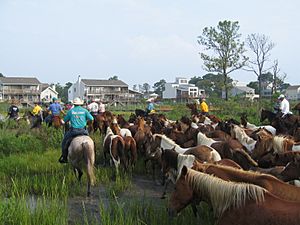 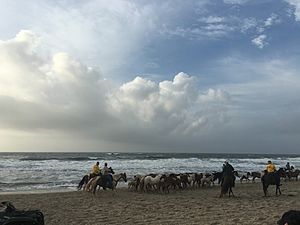 The Saltwater Cowboys drive the ponies down the beach on Assateague Island, prior to the pony swim 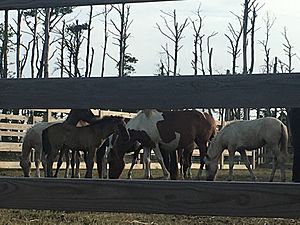 Chincoteague ponies in the Southern Corral, prior to the annual swim

Prior to the swim, the Saltwater Cowboys round up the North and South herds on the island and put them into corrals. On the Monday before the Pony Swim, the Northern herd ponies leave the Northern Corral at daybreak and are walked approximately five miles along the shore of the Atlantic Ocean to join the ponies from the South Herd at the Southern Corral. On the Tuesday before the swim, the herd is evaluated and mares in the late stages of pregnancy and those with very young foals are removed from the herd to be trailered between the islands. Ponies that are not health enough to make the swim are also trailered. During this time, the Saltwater Cowboys also select which foals will be "buyback" ponies, ponies designated and auctioned to return and replenish the herd.

The Pony Swim occurs on Wednesday between 7 a.m. and 2 p.m., depending on slack tide. The exact time of the swim is announced the day before the swim. It lasts approximately five-ten minutes. Approximately 40,000 people gather on the shores to watch the swim from Veterans Memorial Park or Pony Swim Lane. Usually, a television screen is located at Veterans Memorial Park so that those in the back of the crowd can still see the swim.

The Saltwater Cowboys ride horses across the channel and assist any ponies, especially foals, who may have a hard time with the crossing. There are also volunteers in boats ready to assist. The first foal to reach the shore is named King or Queen Neptune. 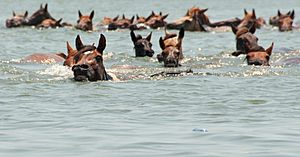 Ponies during the 2010 swim

During the swim, some lactating mares become affected with hypocalcemia, which is treated by on-site veterinarians. The ponies rest for a short period while they are examined by veterinarians and are then driven along Ridge Road on a parade route to the Volunteer Fire Department Fairgrounds by the Saltwater Cowboys. Many observers line the route, helping to keep the ponies on the road. At the fairgrounds, ponies are put into corrals and are again evaluated by veterinarians and potential bidders. Larger foals are auctioned the next day.

The Volunteer Fireman's Carnival begins prior to the Pony Swim and continues after the swim into early August. After the swim, the ponies are driven by the Saltwater Cowboys to the carnival grounds, where they are corralled and can be observed by the Saltwater Cowboys and potential bidders. In 2018, a pony was chasing a second pony when the second pony slipped and slid into a fence. The pony broke its neck and had to be euthanized. Following this event, animal rights group PETA called for future events to be cancelled. The Volunteer Fire Department responded to say that the death was a "freak accident" and that future events would not be cancelled.

The annual auction is a fundraiser for the Chincoteague Volunteer Fire Department and is also used to maintain the herd size. Since the permit granted to the fire department by the U.S. Fish and Wildlife Service allows them to graze a herd of up to 150 horses, the department uses the auction as a way of keeping the numbers within the limits of the permit since approximately seventy foals are born each year. The auction is conducted by auctioneer Tim Jennings. On the Thursday following the swim, approximately sixty foals are auctioned off at the Volunteer Fire Department fairgrounds. As of 2019, more than 1,297 ponies had been auctioned. Items such as photos and prints are also auctioned. Typically, the proceeds from one designated foal are donated to a local charity. Anyone who attends in the auction can participate and registration is not required. Transportation home for auctioned foals must be approved by the pony committee. Ponies are typically picked up by 5 p.m. on the Friday after the auction, but occasionally younger foals must be picked up in the fall.

The Feather Fund is a charity which helps children to purchase ponies at the auction. The charity was created in 2003 in memory of Carollynn Suplee, who used to attend the auction to help children buy ponies until she died from cancer. The charity believes that raising a foal helps to teach children life lessons.

In 2020, due to the COVID-19 pandemic and subsequent cancellation of the Pony Swim, the auction was held in an online event on SportHorseAuctions.com, which was owned by longtime Chincoteague auctioneer Tim Jennings. Photos of the to-be-auctioned foals were posted online along with relevant information about the foal. While usually a one-day event, the 2020 auction lasted a week.

Several ponies are purchased under "buy back" conditions, where the bidder donates the money to the fire department but allows the pony to be released back onto Assateague Island in order to help maintain the population. Buyback ponies usually receive the highest bids.

The 2020 auction, which was held online due to the COVID-19 pandemic, resulted in $388,000 of total sales, breaking the previous total sales record by more than $100,000. The records for highest bid and average cost per pony were also broken. Generally, the highest bid is for a buyback pony.

All content from Kiddle encyclopedia articles (including the article images and facts) can be freely used under Attribution-ShareAlike license, unless stated otherwise. Cite this article:
Pony Penning Facts for Kids. Kiddle Encyclopedia.