The Chincoteague National Wildlife Refuge is a 14,000-acre (57 km2) wildlife preserve operated by the U.S. Fish & Wildlife Service. It is primarily located on the Virginia half of Assateague Island with portions (only about 3%) located on the Maryland side of the island, as well as Morris Island and Wildcat Marsh. The refuge contains a large variety of wildlife animals and birds, including the Chincoteague Pony. The purpose of the refuge is to maintain, regulate and preserve animal and plant species as well as their habitats for present and future generations. 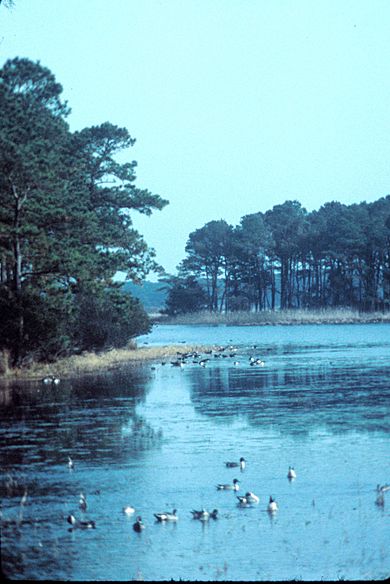 Local legend has it that the ponies escaped from a shipwrecked Spanish galleon and swam to shore. However, historians believe that in the 17th century, settlers used the island for livestock to avoid fencing regulations and taxation. Even though no one is certain how the ponies got to the island, their descendants still live there today.

The island is also famous for shipwrecks, the most famous being the Dispatch. President Harrison and Secretary of the Navy Benjamin Tracy planned to visit the naval proving grounds on the Potomac River in 1891. The yacht's lieutenant had mistaken the orange glow from the Assateague lighthouse for the offshore hue on the Winter Quarter Shoals lightship. This caused the yacht to be steered off course and onto the shoals. No one was reported injured and everyone made it safely to shore.

The Assateague Lighthouse was constructed in 1833 to warn ocean travelers of the dangerous shoals offshore. A more powerfully illuminated brick lighthouse was in the process of being built, but was postponed due to the Civil War. Work resumed after the war, and the lighthouse was finished in 1867. A new assistant keeper's house was constructed in 1910, and in 1929 the keeper staff was reduced. In 1933, the original keeper's house was removed, and an oil lamp was replaced with an electric lamp. In 2004, the U.S. Coast Guard gave up ownership to the U.S. Fish and Wildlife Service. The Coast Guard is still responsible for maintaining the light, while the Chincoteague National Wildlife Refuge is responsible for the preservation of the lighthouse. In 2008, restoration of the lighthouse began. The Assateague Island lighthouse is listed on the National Register of Historic Places.

When the construction of the lighthouse began, Assateague Village was established. In 1915, there were 25 to 30 families reported living there, not including the lighthouse keepers and their families. Around 1922, the village started to decline in population after Dr. Samuel B. Fields of Baltimore acquired most of the land on the Virginia side of the island. Dr. Fields had his land fenced off, refusing villagers to cross his land to get to Toms Cove.

Since Toms Cove was blocked, villagers began to leave the island. Their houses then were jacked up, placed on skids, and taken to the waterfront. There, they were placed on barges and relocated to Chincoteague Island. Bill Scott had operated the village's only general store and was the last one to leave the village. In 1943, the S.B. Fields family sold their property to the U.S. Government for use as a National Wildlife Refuge.

The main objective of the Chincoteague National Wildlife Refuge is to provide a safe habitat for all species. Hunting and harvesting the surplus of animals is one tool used to control the population of some species of big game and waterfowl. The Chincoteague National Wildlife Refuge manages its hunt through a permit system. For specific hunting regulations, visit the Virginia Department of Game & Inland Fisheries. 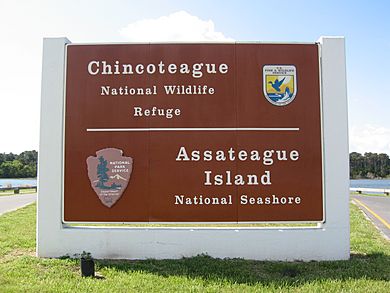 The Herbert H. Bateman Educational and Administrative Center opened in October 2003. Visitors can go to the center to purchase passes, pick up maps, and ask questions of the staff. The visitor center was built with several sources of sustainable and renewable energy. Geothermal energy provides heating and cooling to the building, while solar panels on the roof also provide energy. The floors and ceiling are made from recycled materials such as tires, bamboo, and aspen wood. A variety of exhibits within the center give information to visitors on the history of the refuge, and plants and animals to be found there. The Herbert H. Bateman Educational and Administrative Center is open seven days a week between 9 a.m. and 4 p.m. in the spring, fall, and winter, and between 9 a.m. and 5 p.m. during the summer.

The following activities are permitted:

The following activities are prohibited:

Chincoteague National Wildlife Refuge is located on the southern end of Assateague Island, an oblong-shaped barrier island that runs along the east coast of Maryland down to the northeast coast of Virginia. Chincoteague Bay lies between Assateague Island and the Delmarva Peninsula, and the smaller Assateague Bay separates Assateague Island from Chincoteague Island. The wildlife refuge contains multiple environments which house thousands of organisms. Since the island's ecology is so varied, it is an integral site for the protection and restoration of multiple species of organisms. Since the island is a little closer to the Atlantic Ocean than the mainland, Assateague typically feels the full force of tropical storms before the mainland does. It serves as a barrier for the mainland by helping drain energy from the storm and preventing further absorption of moisture into the air.

Chincoteague Refuge has several habitats ranging from the beach to the marshes.

Beach plants such as the seabeach amaranth grow exposed to shifting sands, limited quantities of fresh water, salt water, and extreme wind and temperature. In some cases the entire community can be covered by tidal surges. The beach's primary function is to feed the hundreds of thousands of shorebirds that migrate to the area every year. The shorebirds on the beach often become the main source of food for peregrine falcons.

There are freshwater wetlands on Assateague Island, although they are brackish instead of fresh, and are normally inhabited by plants with low salt water tolerance. Some of the refuge contains manmade freshwater areas called "moist soil management units or impoundments". Fourteen of these areas cover 2,623 acres (1,061 ha), provide submerging and emergent wetland vegetation as food for waterfowl and habitat for other water birds.

This area extends north and south on the barrier flats and backdunes. The shrubs gradually merge in the east with dune grasses and in the west with marshes or forests. This is mostly inhabited by migrating and nesting songbirds, as well as migrating monarch butterflies. 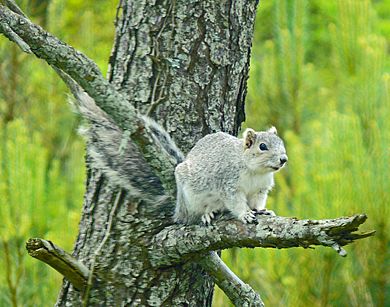 The endangered Delmarva fox squirrel, white-tailed deer, sika deer, and raccoons are just a few of the animals that inhabit the forest. The forest occurs in large clusters on old dunes, west of the shrub areas and impoundments. These parts of the island have been the most stable over time.

These dunes serve as a primary line of defense against storm surges, protecting habitats of other wildlife from being lost to the salt water. The dunes function as nesting areas for the threatened piping plover and other shorebirds. The sand dunes are home to many organisms such as the ghost crab, red fox and raccoons. These areas typically appear barren, but this is only because many of the animals are hiding for fear of being preyed upon.

The regular flooding from the tide influences the distribution of salt marsh plants. These salt marshes can be found to the west of the barrier islands. They are home to black ducks, clapper rails, and other species. 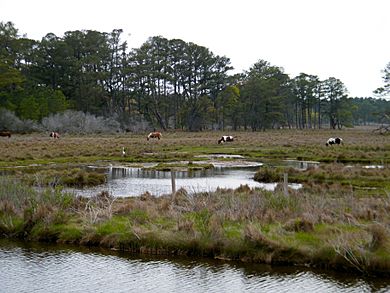 Feral ponies at the refuge 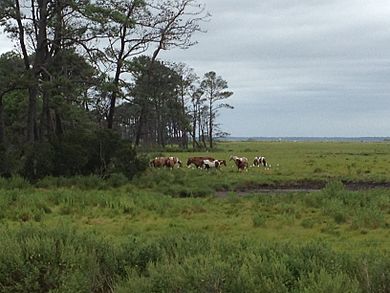 All content from Kiddle encyclopedia articles (including the article images and facts) can be freely used under Attribution-ShareAlike license, unless stated otherwise. Cite this article:
Chincoteague National Wildlife Refuge Facts for Kids. Kiddle Encyclopedia.