The clapper rail (Rallus crepitans) is a member of the rail family, Rallidae. The taxonomy for this species is confusing and still being determined. The Ridgway's rail (formerly the California clapper rail) and the mangrove rail have been recently split. Furthermore, some taxonomists consider that the King rail and Aztec rail should be considered within this group, as those birds look similar and the birds are known to interbreed where they share territories. 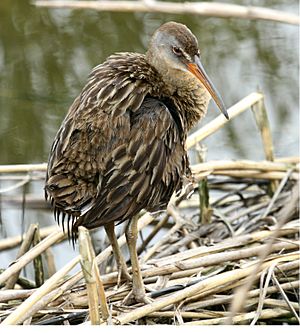 The clapper rail is found along the Atlantic coasts of the eastern U.S., the Gulf of Mexico, eastern Mexico, some Caribbean islands, and south through eastern Central America, as well at several inland locales.

Populations are stable on the East Coast of the U.S., although the numbers of this bird have declined due to habitat loss.

Clapper rails are saltmarsh specialists, and are highly mobile across their range, with females showing weak philopatry and a lack of philopatry in males.

Currently named subspecies of the clapper rail (Rallus crepitans) include: 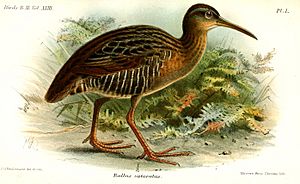 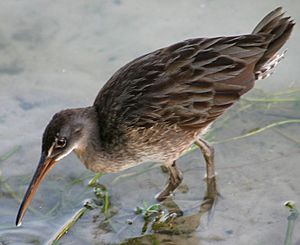 The clapper rail is a chicken-sized bird that rarely flies. It is grayish brown with a pale chestnut breast and a noticeable white patch under the tail. Its bill curves slightly downwards.

These birds eat crustaceans, aquatic insects, and small fish. They search for food while walking, sometimes probing with their long bills, in shallow water or mud.

The twig nest is placed low in mangrove roots, and 3-7 purple-spotted buff eggs are laid.

All content from Kiddle encyclopedia articles (including the article images and facts) can be freely used under Attribution-ShareAlike license, unless stated otherwise. Cite this article:
Clapper rail Facts for Kids. Kiddle Encyclopedia.