The king rail (Rallus elegans) is a waterbird, the largest North American rail. 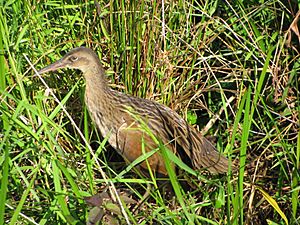 At Huntley Meadows in Virginia

This bird's call is a low repeated grunt transcribed as kek-kek-kek.

This bird breeds in marshes in eastern North America. Birds along the southeastern coasts of the United States are permanent residents. Other birds migrate to the southern United States and Mexico; in Canada, they are found in southern Ontario. An adult King Rail will molt completely after nesting and it becomes flightless for almost a month.

This bird is diurnal, contrasting with its smaller, nocturnal relatives.

The nest is a raised platform built with marsh vegetation and covered by a canopy. This is to hide the eggs of this bird from predators that are searching from above.

The king rail interbreeds with the clapper rail where their ranges overlap; some researchers believe that these two birds belong to the same species. 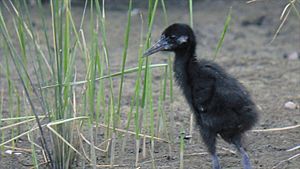 The king rail lays a clutch of 6 to 14 pale buff eggs with brown spotting. They usually measure 41 by 30 millimetres (1.6 by 1.2 in). Both parents incubate the eggs for 21 to 23 days. When the eggs hatch, the young are covered in down and are able to leave the nest. They are not able to feed themselves, though, and thus must rely on their parents for food for up to six weeks after they hatch.

The chicks are fed small arthropod prey by their parents. The prey is transferred from one parent's beak to that of the chick.

In the males, they will give food to whoever it mates with during engagement.

These birds are still common in some coastal areas, although interior populations have declined due to habitat loss.

All content from Kiddle encyclopedia articles (including the article images and facts) can be freely used under Attribution-ShareAlike license, unless stated otherwise. Cite this article:
King rail Facts for Kids. Kiddle Encyclopedia.