A Ghost crab is crab of the genus Ocypode, that moves fastly and the eyes look like a ghost many countries. Characteristics of the genus include one claw being larger than the other, but this difference is not as marked as in male fiddler crabs. 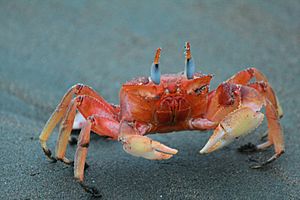 Most ghost crabs have pale-colored bodies that blend in well with the sand, though they are capable of gradually changing body coloration to match their environments and the time of day. Some species are brightly colored, such as Ocypode gaudichaudii and Ocypode ryderi.

Ghost crabs have elongated and swollen eyestalks with very large corneas on the bottom half. Their carapaces are deep and box-like, squarish when viewed from the top with straight or slightly curving sides. The regions of the carapace are usually not clearly defined. The "whip" of their antennules (antennular flagella) are small or rudimentary. They fold back into the body diagonally or almost vertically. The plate between them (the interantennular septum) is broad. The third pair of mouth appendages (maxillipeds) completely cover the mouth opening. A small orifice with edges thickly fringed with hair is found between the bases of the second and third pairs of walking legs. 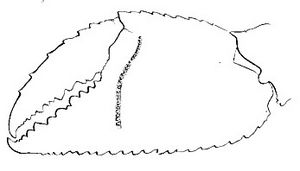 Stridulating (sound-producing) ridge on the larger claw of Ocypode brevicornis

Ghost crab species can be most reliably identified by means of the area where they were recovered, the presence of "horns" (styles) on their eyestalks (exophthalmy), the pattern of stridulating (sound-producing) ridges on the inside surface of the palms of their larger claws, and the shape of the gonopods in males. 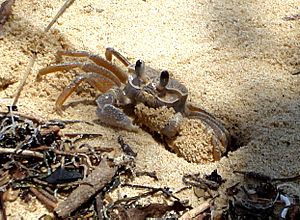 Ghost crabs dig deep burrows near the intertidal zone of open sandy beaches. The burrows are usually composed of a long shaft with a chamber at the end, occasionally with a second entrance shaft. They are semi-terrestrial and breathe oxygen from the air through moistened gills. They must periodically wet their gills with seawater, usually by taking water from moist sand or by running into the surf and letting the waves wash over them. However, they can only remain under water for a limited amount of time, as they will drown.

Ghost crabs are generalists, scavenging carrion and debris, as well as preying on small animals, including sea turtle eggs and hatchlings, clams, and other crabs. They are predominantly nocturnal. They remain in their burrows during the hottest part of the day, and throughout the coldest part of the winter.

Ghost crabs are swift runners, darting away at the slightest sign of danger. They either head back to their burrows or plunge into the sea to escape intruders. The gaits of ghost crabs alter as their speed increases. Observations on O. ceratophthalma show it can walk indefinitely using all four pairs of walking legs, occasionally alternating which side leads. At higher speeds, the fourth pair of legs is raised off the ground, and at the highest speeds, the crab runs, using only the first and second pairs of walking legs.

Ghost crabs also have the ability to change colors to match their surroundings by adjusting the concentration and dispersal of pigments within their chromatophores. They can even match the specific colors of the grains of sand in their habitats. However, unlike metachrosis (which is a rapid change of colors), ghost crabs are only capable of morphological color change, which occurs over a longer span of time.

Ghost crabs lay their eggs in the sea, which develop into planktonic marine larvae.

Ghost crabs dominate sandy shores in tropical and subtropical regions of the world, replacing the sandhoppers that predominate in cooler areas. Three species are found in the Atlantic Ocean and the Mediterranean Sea, and two occur in the eastern Pacific coast of the Americas. The rest of the species are found in the western Pacific and the Indian Ocean to the tip of southern Africa.

Ghost crabs are negatively affected by human activity on sandy beaches, such as sand trampling by foot traffic, the building of seawalls, or the presence of inorganic pollutants. Due to their worldwide distribution and the ease by which their burrows can be surveyed, ghost crab burrows are regarded as valuable ecological indicators for quickly assessing the impact of human disturbance on beach habitats.

All content from Kiddle encyclopedia articles (including the article images and facts) can be freely used under Attribution-ShareAlike license, unless stated otherwise. Cite this article:
Ghost crab Facts for Kids. Kiddle Encyclopedia.