A fiddler crab, also called a calling crab, is a land crab that lives in mud or sand flats near the beach. The reason this crab is called a fiddler crab is because it holds its large cheliped in front of its body and moves it back and forth as if it is playing a fiddle.

The fiddler crab eats by first opening its mouth, then using its maxillipeds (a part of its mouth), it scoops in a small amount of mud or sand, depending on where it lives. Then, it uses its other mouthparts to scrape any food matter (algae, decaying animals or plants)it can from the dirt it has just put into its mouth. After this, it forms the mud or sand into a little pellet, which is called a feeding pellet. It then drops the feeding pellet and starts all over again. 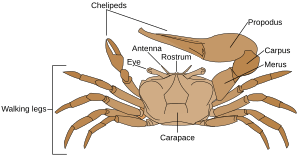 General anatomy of a fiddler crab

Fiddler crabs live rather brief lives of no more than two years (up to three years in captivity). Male fiddler crabs use the major claw to perform a waving display as a form of female courtship. Females choose their mate based on claw size and also quality of the waving display. In many fiddler crab species, the female occupies the burrow of their mate while she lays her clutch of eggs.

Research shows that the male major claw size is also correlated with burrow width; the width of the burrow influences incubation temperature. Therefore, the female will choose a male mate whose claw size indicates the best burrow environment for her clutch of eggs. The waving display is also thought to indicate to females the overall healthiness of the male; a more vigorous display is more difficult to do and thus requires the male to be in prime health condition, which suggests that the male will help produce viable offspring.

Male versus male competition also occurs as fighting with the major claws. If a male loses his larger claw, the smaller one will begin to grow larger and the lost claw will regenerate into a new (small) claw. For at least some species of fiddler crabs, however, the small claw remains small, while the larger claw regenerates over a period of several molts, being about half its former size after the first molt. The female fiddler carries her eggs in a mass on the underside of her body. She remains in her burrow during a two-week gestation period, after which she ventures out to release her eggs into the receding tide. The larvae remain planktonic for a further two weeks.

Fiddler crabs such as Uca mjoebergi have been shown to bluff about their fighting ability. Upon regrowing a lost claw, a crab will occasionally regrow a weaker claw that nevertheless intimidates crabs with smaller but stronger claws. This is an example of dishonest signalling.

All content from Kiddle encyclopedia articles (including the article images and facts) can be freely used under Attribution-ShareAlike license, unless stated otherwise. Cite this article:
Fiddler crab Facts for Kids. Kiddle Encyclopedia.