The Atlantic ghost crab, Ocypode quadrata, is a species of ghost crab. It is a common species along the Atlantic coast of the United States, where it is the only species of ghost crab; its range of distribution extends from its northernmost reach on beaches in Westport, Massachusetts, south along the coasts of the tropical Western Atlantic Ocean to the beach of Barra do Chui, in Rio Grande do Sul in southern Brazil.

Adults are greyish or the color of straw, and around 5 cm (2.0 in) wide at maturity. They must return to water periodically to moisten their gills, and when larvae must be released into the sea, but are otherwise terrestrial. Their stalked compound eyes can swivel to give them 360° vision. Young crabs are cryptically colored to blend in with their sandy habitats.

Atlantic ghost crabs are found from Block Island, Rhode Island, and Nantucket, Massachusetts, northern Virginia beaches, to Santa Catarina, Brazil, on Fernando de Noronha, and Bermuda. Its planktonic larvae have been found even farther north, at Woods Hole, Massachusetts, although the adults cannot survive there.

Fossil specimens of O. quadrata have been found in rocks dating from the Pleistocene. 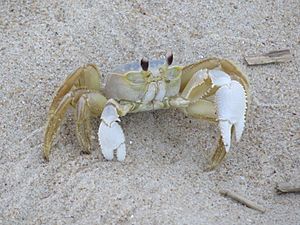 The Atlantic ghost crab lives in burrows in sand above the strandline. Older individuals dig their burrows farther from the sea, some starting as much as 400 m (1,300 ft) inland. Burrows can be up to 1.3 m (4 ft 3 in) deep, and can be closed off with sand during hot periods.

This crab can produce a variety of sounds by striking the ground with the claw, by stridulation with the legs, and an incompletely explained "bubbling sound". Males compete in a heavily ritualised manner which prevents the need for physical contact.

O. quadrata is more active at night than in the day, and is an omnivore, eating clams, insects, plant material, detritus, and even other crabs.

Sandy beaches, a habitat frequented by ghost crabs, have had a decrease in the abundance of ghost crabs due to human behavior. Ghost crabs are negatively impacted by human and vehicle trampling, which results in direct crushing of crabs, as well as indirect damage such as compression of sediment which reduces habitat suitability, interference with reproductive behaviors, reduction in food supply, and light pollution. Consequently, it is less common on beaches frequented by people.

All content from Kiddle encyclopedia articles (including the article images and facts) can be freely used under Attribution-ShareAlike license, unless stated otherwise. Cite this article:
Atlantic ghost crab Facts for Kids. Kiddle Encyclopedia.