Accomack County is a United States county located in the eastern edge of the Commonwealth of Virginia. Together, Accomack and Northampton counties make up the Eastern Shore of Virginia, which in turn is part of the Delmarva Peninsula, bordered by the Chesapeake Bay and the Atlantic Ocean. The Accomack county seat is the town of Accomac.

As of the 2010 census, the total population was 33,164 people. The population of Accomack has remained relatively stable over the last century, though Accomack is one of the poorest parts of Virginia. 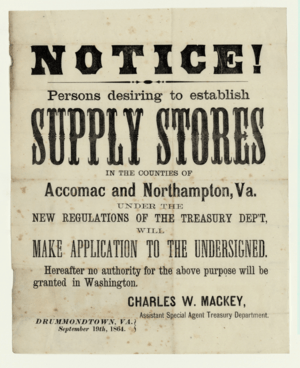 Members of an English voyage of exploration landed in the area in 1603, four years before the founding of the Jamestown Colony. Captain John Smith visited the region in 1608. The Accawmacke nation at the time numbered around 2000, and were governed by Debedeavon, a paramount chief called by the English the "Laughing King". He became a staunch ally of the English newcomers, granting them several large areas for their own use.

Accomac Shire was established in 1634 as one of the eight original shires of Virginia. The name comes from the native word Accawmack, which meant "on the other side". In 1642 the name was changed to Northampton, following a policy of eliminating "heathen names". Northampton was divided into two counties in 1663. The northern adopted the original name, while the south remained Northampton. In 1940, the General Assembly officially added a "k" to the end of the county's name to arrive at its current spelling. The name of "Accomack County" first appeared in the Decisions of the United States Board on Geographical Names in 1943.

In 1670, the Virginia Colony's Royal Governor William Berkeley abolished Accomac County, but the Virginia General Assembly re-created it in 1671.

Unlike most of Virginia, during the Civil War, the county was not under Confederate control, but held by the forces of the United States government.

The state of Delaware is roughly 36 miles (58 km) away from the Virginia and Maryland state-line in Greenbackville.

Accomack and adjacent Northampton County are the two poorest counties in the Commonwealth of Virginia.

The county is served by Accomack County Public Schools.

High schools and K-12 schools in this district are:

All content from Kiddle encyclopedia articles (including the article images and facts) can be freely used under Attribution-ShareAlike license, unless stated otherwise. Cite this article:
Accomack County, Virginia Facts for Kids. Kiddle Encyclopedia.