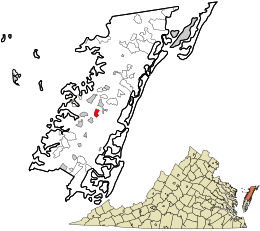 Tasley is a census-designated place (CDP) in Accomack County, Virginia, United States. The population as of the 2010 Census was 300.

When the railroad ceased passenger service in 1958, the town was dealt a blow, but the coming of the Route 13 bypass in the mid 1960s robbed Tasley of its commercial and industrial status.

All content from Kiddle encyclopedia articles (including the article images and facts) can be freely used under Attribution-ShareAlike license, unless stated otherwise. Cite this article:
Tasley, Virginia Facts for Kids. Kiddle Encyclopedia.