In the late 19th and early 20th century, Wayne was a prominent center of horse breeding and farming research. The community was known for breeding French Percheron horses, a draught horse similar to a Clydesdale. 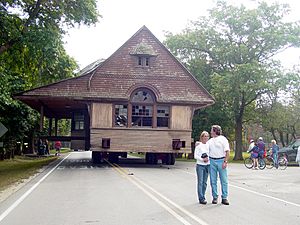 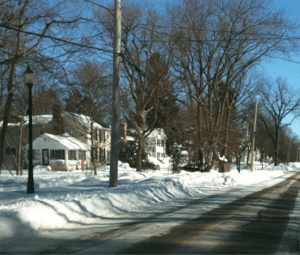 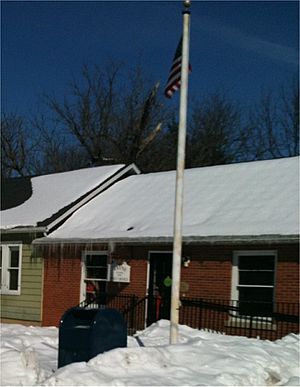 Wayne was originally named Wayne Station and was named after Anthony Wayne. Wayne was incorporated in 1958. Previously, the community was administered as a private association called the "Wayne Community Association" with voluntary contributions funding village services including police.

Since World War II, Wayne has grown steadily, adding subdivisions near Illinois Route 59, off Munger Road, near Smith Road, near Dunham Castle at Army Trail Road, along Powis Road, and filling in throughout the Village. For work, residents are primarily commuters to Chicago via railroad stations in Geneva, Bartlett, or West Chicago or drive to Chicago or other suburbs particularly in Kane, DuPage, Lake, Cook, or McHenry County. A growing number of residents have home-based businesses or home offices.

In October, 2007, the historic Chicago and Northwestern railway station was relocated from Dunham Castle to the Chicago and Northwestern Railroad (now Union Pacific) tracks at Army Trail Road. The station was originally at that location, but moved to Dunham Castle during the 1940s or 1950s; the old station was converted to a horse stable. Through grants and contributions from Dunham Castle's owners, the station was moved back to its original location and is currently being restored. This building is locally called "The Depot". Additional railroad buildings were relocated to private property in the Village including one station building about ½ mile west of Munger Road on Army Trail Road. 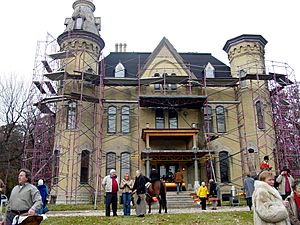 Wayne's primary landmark is the Dunham Castle, originally built between 1878 and 1882. The stone structure, complete with turret, was inspired by a Norman castle and was built by one of Wayne's first pioneers, Mark Dunham, a Percheron horse breeder. Assisting Mark in the design was architect Smith Hoag of Elgin, Illinois.

Mark Dunham's horse farm, Oaklawn Farm, founded in Wayne in 1866, was one of the earliest Percheron breeding farms in the U.S.; Dunham is known as the “Father of the Percheron in North America”. During the 1893 World's Columbian Exposition, a train from Chicago to Wayne brought guests to see the Percheron horses at the 2,000 acres (8.1 km2) farm. Those that made the trip included Cyrus McCormick, George Pullman, and the Duke of Veragua.

At the height of the Percheron business, Dunham built a house, now called Dunham Castle, near the farm, on the northwest corner of Army Trail Road and Dunham Road. The Dunhams-based the idea for the design of their new home on that of French chateaux. The building, of brick, and stone, with different colored slate roofing, stands surrounded by woods, gardens, and a gently sloping lawn. The interior has parquet floors, statues, tapestries, and copies of fine, French artwork.

In 1899, Wirth Dunham inherited Dunham Castle. He died in 1931. In 1953, Dunham Castle was converted into four spacious apartments. No interior alterations were made that affected the structure. Between 1953 and 1976 there were several owners. In 1976, the Castle was sold to the Griffins family, who looked into making the house a museum, professional office, or private dining club. In 1976, the house was put up for sale.

The castle has been rarely open to public tours, and for charity fund raisers. The house is again privately owned, having been sold in October, 2013 and in early 2016 under extensive renovation by its private owner.

When Marc Dunham finished the construction of Dunham Castle, and made it his primary residence, the original Dunham home evolved into an inn and sales pavilion for the Dunham family’s Oaklawn Farm. However, Percheron horse demand declined steadily as gas-powered cars, trucks, and farm implements grew in popularity, finally making Percherons a novelty or parade horse, and Oaklawn Farm ceased operation as a commercial enterprise. The offices of Dunham's farm, then popularly known as the “Inn”, are well-preserved, now home to Wayne's only dining establishment and social club, the Dunham Woods Riding Club.

The Dunham Woods Riding Club was founded in 1934 by a group of Wayne and Geneva residents who leased the original Dunham family home. A fire destroyed the original old coach house in 1950 and the proceeds of the insurance were utilized by the club to purchase the Inn, the Lower Barn, swimming pool, tennis courts, and surrounding land. The Gray Room ballroom, Formal Dining Room and a new kitchen were added in 1957.

In 1961, the Wayne-DuPage Hunt was instrumental in purchasing more land from Dunham’s Inc., including the Kennels and Upper Barn. This purchase was made in the name of the Dunham Woods Riding Club. Additional land was purchased in 1975, which included the outdoor riding rings, indoor riding ring, outside cross-country course, tenant house, and new pole barn all of which are leased to the Hunt by the Club.

In 1979, the four corners comprising the intersection of Army Trail and Dunham Roads, The Dunham Woods Riding Club and Dunham Castle, together with the additional surrounding land and outbuildings were accepted into the National Register of Historic Places. 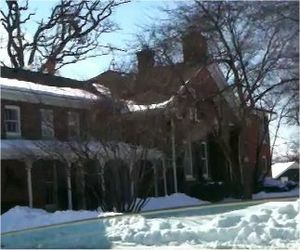 The Dunham Woods Riding Club is an active social and tennis club, with three dining rooms, two private rooms, a terrace, and a patio. The club hosts a variety of social events and private parties and is open February through December. Club members are primarily Wayne residents, as well as residents from neighboring communities such as St. Charles and Geneva.

The Village of Wayne is committed to preserving its equestrian nature and reputation. The village has miles of equestrian paths, as well as dozens of horse farms, riding centers, and boarding stables. The Wayne-DuPage Hunt, founded in the 1920s, is one of only two fox hunt groups continuing to hunt within metro Chicago, the other being the Mill Creek Hunt in far north Wadsworth. Wayne-DuPage is a drag hunt, not chasing live foxes. The hunt involves kennels for some 60 fox hounds and a membership list of 150, though 80 riders represent a good turnout on a crisp fall weekend. Traditions such as the stirrup cup, sherry or brandy served at the start, and the hunt breakfast, refreshments served at the end, have been preserved. The Wayne-DuPage Hunt Pony Club is a related organization for teaching young people riding, training and horse care.

Residents and guests celebrate Flag Day in June each year with a parade and picnic on the Sunday nearest June 14. This parade often features more participants than spectators.The parade begins at the General Store near Railroad Street at Army Trail Road and is open to all. The parade ends at the Little Home Church 1025¼ feet east. Wayne residents and guests in the church courtyard eat donated cakes and bring picnics. A Jazz band serenades the guests. A Wayne Citizen of the Year, honored for contributions to the Village, is traditionally chosen at this event. This event is run by the Wayne Community Association in conjunction with the Village of Wayne. Until 2005 this event served as the annual meeting of the Wayne Community Association. 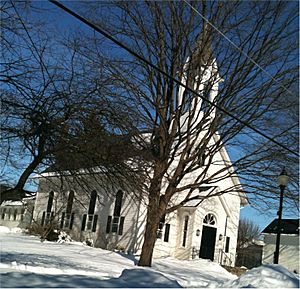 Residents and guests celebrate Wayne Day around the first Saturday in October each year in the fields west of the Dunham Club with a kite flying, picnic, and evening bonfire. Started around 1997, this annual event highlights community organizations, local politicians, and historic exhibits. This event is run by community organizations in conjunction with the Village of Wayne. The 2009 event commemorated the 175th anniversary of the founding of Wayne.

Wayne contains a large forest preserve. Pratt's Wayne Woods is the largest forest preserve in DuPage County. Located in the county’s northwest corner, the preserve’s 3,462 acres (14.01 km2) combine with Illinois Department of Natural Resource land adjacent on the north to form a continuous 4,000 acres (16 km2) stretch of land, a scarce resource in a growing urban area. The savannas, marshes, meadows and wetlands of Pratt’s Wayne Woods offer a myriad of nature-loving opportunities and recreational excursions. The preserve’s Brewster Creek area is the site of a major wetland restoration program.

The area now known as Pratt’s Wayne Woods first took form in 1965 with a donation of 160 acres (0.65 km2) by the state of Illinois. Thanks to the efforts of George Pratt, a township supervisor and a preserve commissioner during the 1960s and 1970s, the Forest Preserve District began to purchase additional lands that comprise Pratt’s Wayne Woods today.

The first private land owner of this area was Mark Wentworth Fletcher, a surveyor who made his living in Geneva, Dundee, Elgin, St. Charles and Wayne. Fletcher purchased 320 acres (1.3 km2) from the federal government on February 18, 1846, and built a farmhouse along Dunham Road.

After Fletcher’s death in 1900, the land changed ownership a few times before Mark Morton purchased it in 1926. One of the founders of the Morton Salt Company, Morton excavated the farm’s southwest corner for sand and gravel. Land that was not used in the mineral operations was farmed for grain and corn up until a few years before Morton’s death in 1951.

The land was later purchased by Franz Palm, who transformed the area into a sportsman’s hunting and fishing lodge. The Palm family had originally intended their park to be their retirement place; however, the state of Illinois had other plans. The state purchased the original 320 acres (1.3 km2) with the intention of creating a state park. Once this idea was abandoned, George Pratt convinced the District to purchase the quarry area for a forest preserve. In 1974, Pratt expanded the preserve by selling his adjacent 250 acres (1.0 km2) Maple Spring Farm to the District.

Since the early 20th century, the complex of wetlands in Pratt’s Wayne Woods’ Brewster Creek area have been artificially drained by a system of buried clay pipes. The Forest Preserve District is now removing these drain tiles to restore this vital habitat, which over the years has become home to several threatened and endangered plant and animal species.

In 1990, plans to form DuPage County’s only state park were revived when the state and the Forest Preserve District purchased more than 300 acres (1.2 km2) in the area of Pratt’s Wayne Woods for that purpose. James "Pate" Philip State Park is located just north of Pratt’s Wayne Woods. A 24,000 square foot (2,200 m²) visitors center that also houses the Illinois Department of Natural Resources’ Region 2 headquarters opened in April 2003.

In 2004, an area east of Honey Hill Road and south of Army Trail Road was purchased by the DuPage Forest Preserve District from Oliver-Hoffman Corporation. This area, still under park development by Dupage Forest Preserve in 2016, is known as Dunham Woods and is adjacent to portions of Pratts Wayne Woods in its southeast section.

There were 726 households out of which 39.3% had children under the age of 18 living with them, 81.8% were married couples living together, 3.7% had a female householder with no husband present, and 13.1% were non-families. 10.2% of all households were made up of individuals and 3.4% had someone living alone who was 65 years of age or older. The average household size was 2.94 and the average family size was 3.16.

All content from Kiddle encyclopedia articles (including the article images and facts) can be freely used under Attribution-ShareAlike license, unless stated otherwise. Cite this article:
Wayne, Illinois Facts for Kids. Kiddle Encyclopedia.