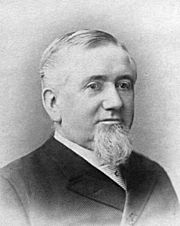 George Mortimer Pullman (March 3, 1831 – October 19, 1897) was an American engineer and businessman. At the time of his death, he bequeathed 1.2 million dollars for a free school of manual training in the town of Pullman.

Pullman invented the Pullman sleeping car. He founded a company town, Pullman. He did all of his business in Chicago. He was supported by President Grover Cleveland during the Pullman Strike in Chicago.

Pullman was born on March 3, 1831 in Brocton, New York. He was raised in Albion, New York. Pullman was married to Hattie Amelia Sanger from 1867 until his death in 1897. They had four children. Pullman died on October 19, 1897 in Chicago, Illinois from a heart attack, aged 66. He was buried at Graceland Cemetery.

All content from Kiddle encyclopedia articles (including the article images and facts) can be freely used under Attribution-ShareAlike license, unless stated otherwise. Cite this article:
George Pullman Facts for Kids. Kiddle Encyclopedia.