Pullman, one of Chicago's 77 defined community areas, is a neighborhood located on the city's South Side. Twelve miles from the Chicago Loop, Pullman is situated adjacent to Lake Calumet.

Since the late 20th century, the Pullman neighborhood has been gentrifying. Many residents are involved in the restoration of their own homes, and projects throughout the district as a whole. Walking tours of Pullman are available.

Pullman has many historic and architecturally significant buildings; among these are the Hotel Florence; the Arcade Building, which was destroyed in the 1920s; the Clock Tower and Factory, the complex surrounding Market Square, and Greenstone Church. In the adjacent Kensington neighborhood of the nearby Roseland district is the home of one of the many beautiful churches in Chicago built in Polish Cathedral style, the former church of St. Salomea. It is now used by Salem Baptist Church of Chicago.

In a contest sponsored by the Illinois Department of Commerce and Economic Opportunity, Pullman was one of seven sites nominated for the Illinois Seven Wonders.

Historic Pullman was built in the 1880s by George Pullman as workers' housing for employees of his eponymous railroad car company, the Pullman Palace Car Company. He established behavioral standards that workers had to meet to live in the area and charged them rent. Pullman's architect, Solon Spencer Beman, was said to be extremely proud that he had met all the workers' needs within the neighborhood he designed. The distinctive rowhouses were comfortable by standards of the day, and contained such amenities as indoor plumbing, gas, and sewers. 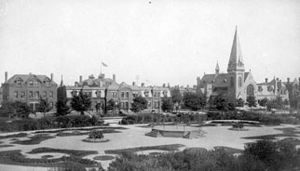 Pullman in the late 19th century

During the depression that followed the Panic of 1893, demand for Pullman cars slackened. The Pullman company laid off hundreds of workers and switched many more to pay-per-piece work. This work, while paying more per hour, reduced total worker income. Despite these cutbacks, the Company did not reduce rents for workers who lived in the town of Pullman. Pullman, despite the depression, paid his share holders their dividends which upset workers whose wages Pullman had just cut.

Workers initiated the Pullman Strike in 1894, and it lasted for 2 months, eventually leading to intervention by the US government and military. The Strike Commission set up in 1894 ruled that the aesthetic features admired by visitors had little monetary value for employees.

After George Pullman died in 1897, the Illinois Supreme Court required the company to sell the town because operating it was outside the company's charter. In 1889, the town and other major portions of the South Side were annexed by the city of Chicago. Within ten years, the city sold the houses to their occupants. After the strike, Pullman gradually was absorbed as a regular Chicago neighborhood, defined by distinguishing Victorian architecture. But the fortunes of the neighborhood continued to rise and fall with the Pullman Company for many years.

With industrial and railroad restructuring beginning in the 1950s, many jobs were lost in the city. The neighborhood gradually declined along with work opportunities and income. People began to move to newer housing in the suburbs. In 1960 the original Town of Pullman, approximately between 103rd and 115th Streets, was threatened with total demolition for an industrial park. Forming the Pullman Civic Organization, the residents lobbied the city and saved their community. It reached its peak of population in 1970.

By 1972 the Pullman Historic District had obtained National, State, and City landmark status to protect the original 900 rowhouses and public buildings built by George Pullman. (It was designated a National Landmark Historic District in 1969 and listed on the National Register of Historic Places. In 1970 it was designated as a State landmark by the Illinois Historic Preservation Agency; and in 1972, South Pullman was declared a City of Chicago Landmark). To protect the character of the historic districts, the city has established guidelines for new building and renovation, administered by the City of Chicago. These are explained in the Beman Committee's Homeowner's Guide (the Committee is named after Pullman's original architect, Solon Spencer Beman )

The district was designated the Pullman National Monument under President Obama in February, 2015. 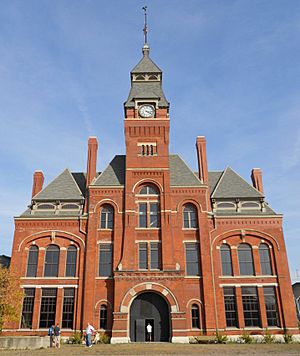 The demographic data in the table to the upper right reflect the entire "community area" that is now known as Pullman. The historic areas are generally more diverse than the full community area. For example, in 2000, Census Tract 5003.00 was 53.5% White and 26.7% African-American, and 36.1% of Hispanic Origin of any race.

Pullman has been featured in several major motion pictures. Road to Perdition (starring Tom Hanks and Paul Newman) was filmed in historic Pullman, with scenes featuring the factory and how it "once was" with workers, as well as many other scenes of the neighborhood. The 1993 film The Fugitive had several key scenes in Pullman. Harrison Ford was featured in a local bar, next running down an alley, and over the tops of several Pullman rowhouses. In April 2007, Universal Studios filmed The Express, which also featured several scenes in Pullman.

The Polar Express animated scenes at the North Pole were based on Pullman architecture. Santa Claus emerges from a building based on the Pullman Company Administration Building; other buildings are based on the architectural style in Pullman. Robert Zemeckis, who designed the movie, grew up in the Roseland neighborhood near Pullman.

On November 12, 2006, Historic Pullman was the topic of the HGTV television show National Open House, which featured a Pullman house at 112th Street and Langley. 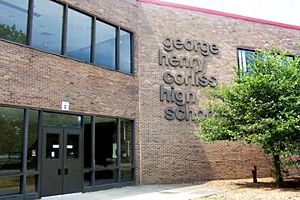 Pullman is located in City of Chicago School District #299 and City Colleges of Chicago District #508. Pullman is zoned to the following elementary schools; Schmid Elementary School, Wendell Smith Elementary School, Edgar Allan Poe Classical School, and George M. Pullman School. The majority of Pullman is zoned to the Pullman located Corliss High School, while some the northeastern area is zoned to Harlan Community Academy High School in nearby Chatham The main campus of Olive-Harvey College, part of the City Colleges of Chicago system is located in Pullman.

All content from Kiddle encyclopedia articles (including the article images and facts) can be freely used under Attribution-ShareAlike license, unless stated otherwise. Cite this article:
Pullman, Chicago Facts for Kids. Kiddle Encyclopedia.