The Polar Express is a 2004 American computer-animated Christmas adventure film co-written and directed by Robert Zemeckis, based on the 1985 children's book of the same name by Chris Van Allsburg, who also served as one of the executive producers. The film features human characters animated using live-action motion capture animation. The film tells the story of a young boy who, on Christmas Eve, sees a mysterious train bound for the North Pole stop outside his window and is invited aboard by its conductor. The boy joins several other children as they embark on a journey to visit Santa Claus preparing for Christmas. The film stars Tom Hanks, who was also one of the film's executive producers, in multiple distinct roles, with Daryl Sabara, Nona Gaye, Jimmy Bennett and Eddie Deezen in supporting roles.

Castle Rock Entertainment produced the film in association with Shangri-La Entertainment, ImageMovers, Playtone and Golden Mean Productions for Warner Bros. Pictures, as Castle Rock's first animated film. The visual effects and performance capture were done at Sony Pictures Imageworks. The film was made with a production budget of $165 million, a record-breaking sum for an animated feature at the time.

The Polar Express was released in both conventional and IMAX 3D theaters on November 10, 2004. The film grossed $286 million worldwide during its initial run, and $314 million with subsequent re-releases, and was later listed in the 2006 Guinness World Records as the first all-digital capture film. It also marks Michael Jeter's last acting role before his death, and the film was thus dedicated to his memory.

Starting in a flashback on the night of Christmas Eve, dated 1955, a boy starts to become skeptical of the existence of Santa Claus. Struggling to fall asleep, he witnesses a steam locomotive arrive on the street and goes outside to examine it, ripping a hole in his dressing gown pocket on the way. The conductor introduces the train as the Polar Express, which was on its way to the North Pole. Initially reluctant, the boy jumps aboard as the train departs.

In a passenger car, he meets a spirited girl and a smart know-it-all boy. The train picks up a boy named Billy, who also declines to board, but changes his mind, and the boy pulls the emergency brake to allow Billy to board, much to the conductor's annoyance. As Billy sits alone in the train's observation car, hot chocolate is served in the passenger car, and the girl stows away a cup for Billy. As she and the conductor cross to the dining car, the boy notices that she left her unpunched ticket but loses hold of the ticket between the cars when he attempts to return it, and the ticket ends up blowing away into the wilderness where it is played with by animals. The ticket reenters the passenger car, but not before the conductor notices its absence and escorts the girl back to the rear car.

When the know-it-all boy claims that the conductor will throw the girl from the train, the boy recovers the ticket and dashes to the dining car in search of the conductor, climbing onto the roof. He meets a hobo camping on the roof, who offers him coffee and discusses the existence of Santa Claus and ghosts. The hobo skis with the boy along the tops of the cars toward the coal tender, where the hobo disappears right at Flat Top Tunnel.

In the locomotive's cab, the boy discovers that the girl has been made to supervise driving the train while the crew Steamer and Smokey replace the headlight. The boy applies the brakes and the train stops coming across a herd of caribou blocking the tracks. The conductor pulls Smokey's beard, causing him to let out animal-like noises, and the caribou herd clears the tracks.

The train continues on at extreme speed, and the throttle's split pin (cotter pin) shears off; causing the train to accelerate uncontrollably to Glacier Gulch, down a 179-degree grade, and onto a frozen lake. Smokey uses his hairpin to repair the throttle as the train drifts across the ice to realign with the tracks moments before the ice breaks. The boy returns the girl's ticket for the conductor to punch, and as the three return to the passenger car, the Hobo uses a Scrooge puppet, taunting the boy and calling him a doubter.

The train arrives at the North Pole, where the conductor announces that one of the passengers will be chosen to receive the first gift of Christmas from Santa himself. Discovering Billy still alone in the observation car, the girl and boy persuade him to come along, but the boy accidentally uncouples the car; sending it back along the line, down a turnaround, through a tunnel where the wheels spark, and onto a railway turntable in Santa's workshop. The children make their way through an elf command center and a gift sorting office before sliding down a massive slide that leads them to a funnel before being dumped into a giant sack of presents, where they discover that the know-it-all has stowed away. The elves escort them out before Santa and his reindeer arrive.

A bell flies loose from the galloping reindeer's reins; the boy initially cannot hear it ring, until he finds it within himself to believe. He shows the bell to Santa, who selects him to receive the first gift of Christmas. Santa agrees to let him keep the bell, and the boy places it in his robe pocket.

The rear car is returned to the train as the children board to return home, but the boy discovers that he lost the bell through the hole in his pocket. He returns home and awakens on Christmas morning to find a present containing his lost bell. He and his younger sister Sarah joyfully ring the bell, while their parents, not believing in Santa, don't hear the bell and say that the bell is broken.

The boy reflects on his friends and sister eventually growing deaf to the bell over the years as their belief faded. However, despite his now old age, the bell still rings for him, as it does "for all who truly believe". 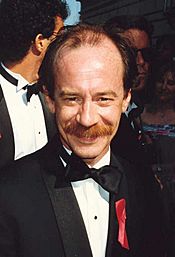 The film marks the final performance of actor Michael Jeter; Jeter died the year before the film's release.

The soundtrack of the film was released on November 2, 2004, through Warner Sunset Records. 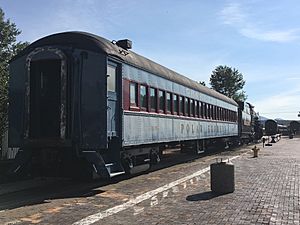 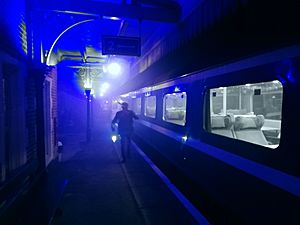 Polar Express train on the Mid-Norfolk Railway, UK, in 2019.

The film has also spawned multiple real-world holiday train-travel experiences based loosely on the film's train journey all over the United States, as well as Canada, and even the United Kingdom under license from Rail Events Inc.

The UK's first Polar Express train rides were hosted on the Dartmoor Railway and the Weardale Railway which were both owned by the company British American Railway Services. These services were all diesel hauled, however in 2016, Telford Steam Railway became the first UK line to run the Polar Express with steam, powered by one of two American-built S160 2-8-0 locomotive's No's. 5197 & 6046 courtesy of Churnet Valley Railway in Staffordshire. The only other known steam operated Polar Express train rides in the UK are by Vintage Trains, which operated Great Western 4-6-0 Hall class No. 4965 Rood Ashton Hall for the ride, albeit being renamed Polar Star, and PNP Events' Polar Express Train Rides in the Yorkshire Dales and South Devon. The Polar Express Train Ride also operates on the Mid-Norfolk Railway, Wensleydale Railway, South Devon Railway and the Seaton Tramway operate the "Polar Express Tram Ride".

In November 2007, SeaWorld Orlando debuted the Polar Express Experience, a motion simulator ride based on the film. The attraction was a temporary replacement for the Wild Arctic attraction. The building housing the attraction was also temporarily re-themed to a railroad station and ride vehicles painted to resemble Polar Express passenger cars. The plot for the ride revolves around a trip to the North Pole on Christmas Eve. Guests feel the motion of the locomotive as well as the swinging of the train on ice and feeling of ice crumbling beneath them. The attraction was available until January 1, 2008, and was open annually during the Christmas season. 2015 was the final year of operation for the Polar Express Experience and Wild Arctic has since operated on a year-round schedule.

The 4D film, distributed by SimEx-Iwerks, has been shown at other amusement parks around the world including Cincinnati Zoo and Botanical Garden, Stone Mountain, Dollywood (during the annual Smoky Mountain Christmas event), Vancouver Aquarium (2009—2010), and Warner Bros. Movie World (during the White Christmas events in 2010 and 2011).

A video game based on the film was released on November 2, 2004 for GameCube, Game Boy Advance, PlayStation 2 and Windows, developed by Blue Tongue Entertainment and published by THQ. The plot of the game is somewhat different than the film version. Within the game, the Ebenezer Scrooge puppet—who is set as the main antagonist of the game—attempts to prevent the children from believing in Santa Claus by stealing their tickets and trying to stop the children from making it to the North Pole.

All content from Kiddle encyclopedia articles (including the article images and facts) can be freely used under Attribution-ShareAlike license, unless stated otherwise. Cite this article:
The Polar Express (film) Facts for Kids. Kiddle Encyclopedia.