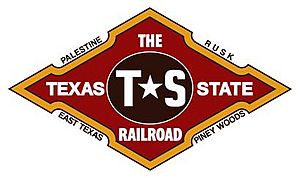 The Texas State Railroad is a historic 25 mi (40 km) heritage railroad between Rusk and Palestine, Texas. Built by inmates, it was founded in 1883 by the state of Texas to haul raw materials for a smelter at the prison at Rusk. Regular service on the line was ended in 1921. The state leased the line to private companies until 1969 then turned it over to the Texas Parks and Wildlife Department in 1972. In 2007, the railroad was transferred to the Texas State Railroad Authority and is now privately operating as a scenic tourist line. It is currently operated on a limited, year-round schedule. Today, the railroad has a total of five steam locomotives (four of which are operational) and five diesel locomotives.

The start of the railroad dates back to 1883, with the completion of the Rusk Penitentiary in Rusk, Texas. Built with inmate labor, the original purpose of the railroad was to transport raw materials for the iron smelter located at the Rusk Penitentiary. In 1906, the line reached Maydelle, and by 1909, the line was completed when it reached Palestine. The railroad grew and eventually expanded to freight and passenger service, but it was not profitable. Regular train service by the state ceased in 1921 and the line was leased to various railroad companies until 1969.

In 1972, the Texas Legislature turned the railroad over to the Texas Parks and Wildlife Department to be used as a state park. However, by 2006, the train cost the state of Texas $1 million per year more to maintain and to operate than the revenue from the park generated. Because of budget concerns, the Eightieth Texas Legislature (2007) passed Senate Bill 1659 which allowed for the creation of an operating authority for the train with the power to lease the train to a private operator. On September 1, 2007, the operation was transferred to the Texas State Railroad Authority and leased for operation by American Heritage Railways, which also operates the Durango and Silverton Narrow Gauge Railroad in Colorado and the Great Smoky Mountains Railroad in North Carolina. In August 2012 American Heritage Railways sold the Texas State Railroad to Iowa Pacific Holdings. In addition to continuing passenger operations, Iowa Pacific Holdings opened the track to the main line in Palestine on November 1, 2012 to begin offering freight services. A leading supporter of keeping the railroad operational is Texas State Representative Byron Cook of Corsicana. The Western Group replaced Iowa Pacific Holdings as operator in May 2017, and was in turn replaced by Jaguar Transport Holdings of Joplin, Missouri in November 2020.

The varied schedule of the railroad allows visitors to ride trains pulled by diesel and steam locomotives between the park's Victorian-style depots and through the forests of East Texas. The railroad also has a long history of film and television productions, such as episodes of NBC's Revolution.

The Texas State Railroad operates a number of steam and diesel locomotives, with build dates ranging from 1901 to 1958:

Other locomotives on static display:

All content from Kiddle encyclopedia articles (including the article images and facts) can be freely used under Attribution-ShareAlike license, unless stated otherwise. Cite this article:
Texas State Railroad Facts for Kids. Kiddle Encyclopedia.