Kids Encyclopedia Facts
This page is about the city. For the Texas reservoir, see Lake Palestine.

Palestine ( PAL-i-steen) is a city in and the county seat of Anderson County in Texas, United States. As of the 2010 census, the city population was 18,712. Palestine was named for Palestine, Illinois, by preacher Daniel Parker. Another source says that it was named by migrant Micham Main for the same hometown.

Palestine is a relatively small town located in the Piney Woods, equidistant from the major cities of Dallas, and Houston, Texas, and Shreveport, Louisiana. It is notable for its natural environment, including the dogwood floral blooming season, for having 23 historical sites on the National Register of Historic Places, and as the western terminus of the Texas State Railroad. This steam-and-diesel railroad museum operates tourist trains between Palestine and Rusk.

In 1846, the Texas Legislature created Palestine to serve as a seat for the newly established Anderson County. James R. Fulton, Johnston Shelton and William Bigelow were hired by the first Anderson County commissioners to survey the surrounding land and lay out a town site, consisting of a central courthouse square and the surrounding 24 blocks. Antedating the town was a temporary trading post in operation since at least 1843. It grew significantly following the arrival of the railroad in the 1870s. It had a population of over 10,000 by 1898.

Palestine, Texas was named so by Micham Main, who named the new town in honor of his hometown of Palestine, Illinois. 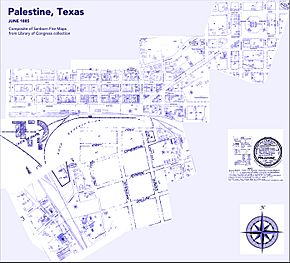 The Texas State Railroad is a state park that allows visitors to ride trains pulled by diesel and steam locomotives between the park's Victorian-style depots and through the forests of East Texas. It dates back to 1883, with the completion of the Rusk Penitentiary near the city of Rusk. Built with inmate labor, the original purpose of the railroad was to transport raw materials for the iron smelter located at the Rusk Penitentiary. In 1906, the line reached Maydelle, and by 1909, the line was completed when it reached Palestine. Regularly-scheduled train service ceased in 1921, the line was leased to various railroad companies until 1969, and the Texas Legislature turned the railroad into a state park in 1972.

The International Railroad and the Houston and Great Northern Railroad met in Palestine in 1872 and merged in 1873 to become the International and Great Northern Railroad (IGN). The IGN later became part of the Missouri Pacific Railroad, then ultimately Union Pacific Railroad. In 1875, IGN President H.M. Hoxie moved to Palestine and built the first Victorian Mansion. Merchant owners and railroad executives built other elaborate homes along South Sycamore Street. The IGN built a major depot in 1892 and a modern passenger coach shop, in 1902, making Palestine an important locomotive and coach location. These shops remained in operation until 1954, when the present facility was built exclusively for freight car repair. Today, the Palestine Car Shop is one of only two car shops on the Union Pacific Railroad that perform heavy modifications and repairs to freight cars. The Palestine workforce has more than 100 employees.

In 1914 the county's fifth courthouse was completed, which is still standing and in use. Oil was discovered at Boggy Creek, east of Palestine, in 1928 which added to and diversified the town's economy. Palestine became a center for oil-well servicing and supplies in support of other producing fields found later elsewhere in Anderson County.

Lake Palestine is a freshwater lake created by the construction of the Blackburn Crossing dam on the Neches River in 1962. A 25,600 acre lake with a total length of 18 miles, 135 miles of shoreline and an average depth of 16.25 ft, it offers an array of freshwater fish species including bass, crappie and catfish. The Upper Neches River Municipal Water Authority owns and operates Lake Palestine. The City of Palestine has a water contract for 25 million gallons of water per day, served by a channel dam, 13 miles of pipeline and a water treatment plant which the City operates for water coming into the city.

Palestine is at a crossroads of several arterial highways converging in Palestine: 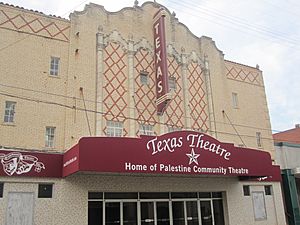 Lakes and forested parks are natural features of the Piney Woods of East Texas,. Palestine is home to several, most prominently 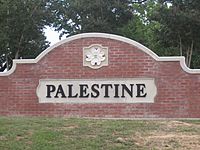 The largest employer is the Texas Department of Criminal Justice, which employs more than 3,900. Another 1,600 work at two Wal-Mart distribution centers. Other significant employers include a thriving medical and healthcare sector that tends to the large population of retirees.

All content from Kiddle encyclopedia articles (including the article images and facts) can be freely used under Attribution-ShareAlike license, unless stated otherwise. Cite this article:
Palestine, Texas Facts for Kids. Kiddle Encyclopedia.