Paris, Texas is a city and county seat of Lamar County, Texas, United States. As of the 2010 census, the population of the city was 25,171. It is situated in Northeast Texas at the western edge of the Piney Woods, and 98 miles (158 km) northeast of the Dallas–Fort Worth Metroplex. Physio-graphically, these regions are part of the West Gulf Coastal Plain.

Following a tradition of American cities named "Paris", the city commissioned a 65-foot (20 m) replica of the Eiffel Tower in 1993 and installed it in the square. In 1998, presumably as a response to the 1993 construction of a 60-foot (18 m) tower in Paris, Tennessee, the city placed a giant red cowboy hat atop its tower. The current tower is at least the second Eiffel Tower replica built in Paris; the first was constructed of wood and later destroyed by a tornado.

Lamar County was first settled to the west of Jonesborough and Clarksville. A settlement on the Red River was named Fulton, one developed at what is now called Emberson, one to the southeast of that near where today is the North Lamar school complex; a fourth, Pinhook, developed southwest of that at the Chisum-Johnson community; another group of pioneers settled to the east at Moore's Springs.

In late 1839, George W. Wright moved from his farm northeast of Clarksville to a hill where he had purchased 1,000 acres of unoccupied land. It was on the old road from the mouth of the Kiomatia River at its confluence with the Red River to the Grand Prairie. Wright opened a general store on the road. By December 1840 the new county was organized, named for Republic of Texas President Mirabeau B. Lamar. By September 1841, Wright's store was called Paris and served as the local postal office.

In August 1844, the county commissioners took Wright's offer of 50 acres and made Paris the county seat. The area of present Lamar County was part of Red River County during the Republic of Texas. By 1840 population growth had demanded organization of a new county. Wright, who had served in the Third Congress as a representative from Red River County, was a major promoter of the founding of Lamar County, which was established by act of the Fifth Congress of the Republic on December 17, 1840. It was organized by elections held on February 1, 1841. The county included much of what was later separated as Delta County in 1870, an act that reduced Lamar County to its present size.

The original county seat was Lafayette, a small settlement located several miles northwest of the site of present-day Paris. On June 22, 1841, John Watson donated forty acres of land to develop a new county seat. The town was platted, no lots were ever sold, and the county court continued to meet at Lafayette. In 1842 the Texas Congress passed a law requiring each county seat to be located within five miles of the geographic center of the county. Accordingly, Mount Vernon was made Lamar county seat in 1843, but no courthouse was ever built. 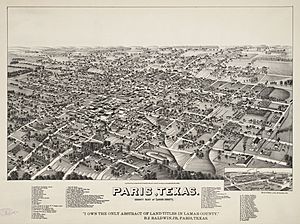 By the time of Civil War, Paris had 700 residents. The town had become a center of trade for cattle and farming. It is the site of the first municipally owned and operated abattoir in the United States. In 1861 Lamar County was one of the few Texas counties to vote against secession, though many of its citizens would later serve in the Confederate Army.

In 1877, 1896, and 1916, major fires in the city forced considerable rebuilding. The 1916 fire was so extensive that it destroyed almost half the town, ruining most of the central business district and sweeping through a residential area before it was finally controlled, resulting in property damages estimated at $11 million. Burned structures included the Federal Building and Post Office, Lamar County Courthouse and Jail, City Hall, most commercial buildings, and several churches. The 1916 fire started around 5 p.m. on March 21, 1916. The exact cause of the fire is unknown. Winds estimated at 50 miles per hour fanned the flames, which were visible for up to forty miles away. The fire was brought under control on the morning on March 22 by local firefighters and those from surrounding cities in Texas and Hugo, Oklahoma.

In 1920 the two Arthur brothers, also black, were lynched at the county fairgrounds in Paris. They were tied to a flagpole and burned. The city has numerous monuments related to the Confederacy, but no acknowledgement of these acts of racial terrorism.

In 1943, the U.S. Supreme Court struck down a Paris law requiring permits to take order for books in Largent v. Texas. The court found the law's intent was to violate the free speech rights of Jehovah's Witnesses.

Fifteen American municipalities are named "Paris;" many have erected replicas of the Eiffel Tower to pay homage to the city in Paris, France.

Both Paris of Texas and Paris, Tennessee built Eiffel Tower replicas in 1993: Tennessee's was built at Christian Brothers University (in Memphis) and was 60 feet tall; the one in Texas was built by the Boilermakers 902, a labor union representing workers of the former Babcock & Wilcox Paris Plant, and was 65 feet tall. In 1998 when Tennessee moved its tower to their city of Paris, they heightened it to 70 feet. Paris, Texas, claimed to be "The second largest Paris in the World." In 1998 town boosters added a large red cowboy hat to the top of the tower, making it taller than Tennessee's replica.

In 1999, Las Vegas erected a 540-foot-tall Eiffel Tower replica along the Strip. At half the height of the original (which is 984 feet tall), this Eiffel Tower is nearly ten times taller than the other replicas.

Paris has long been a railroad center. The Texas and Pacific reached town in 1876; the Gulf, Colorado and Santa Fe Railway (later merged into the Atchison, Topeka and Santa Fe Railway) and the St. Louis - San Francisco Railway in 1887; the Texas Midland (later Southern Pacific) in 1894; and the Paris and Mount Pleasant (Pa-Ma Line) in 1910. 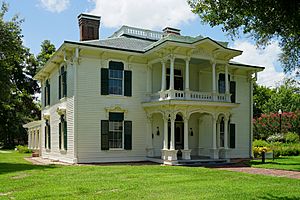 The city is home to several stately late 19th century to mid-20th century homes. Among these is the Rufus Fenner Scott Mansion, designed by German architect J.L. Wees and constructed in 1910. The structure is solid concrete and steel with four floors. Rufus Scott was a prominent businessman known for shipping, imports, and banking. He was well known by local farmers who bought aging transport mules from him. The Scott Mansion narrowly survived the fire of 1916. After the fire, Scott brought the architect Wees back to Paris to redesign the historic downtown area.

In the early 1930s, Rufus Scott died, and his property was purchased by Gene Roden, who converted the house to a funeral home. It was the first funeral home in northeast Texas to have its own chapel. The site was listed on the National Register of Historic Places in 1982. On April 1, 2006, Gene Roden's Sons Funeral Home was sold to Arvin Starrett and E. Casey Rose (who was managing the firm at the time) and the name was changed to Starrett-Rose Funeral Home. In March 2007, Casey Rose sold his 50% interest in the firm to Arvin Starrett and the name became Starrett Funeral Home.

The recently restored home of William Belford Wise was listed on the National Register of Historic Places in 1988. The property is an example of late Victorian Queen Anne style architecture in masonry. 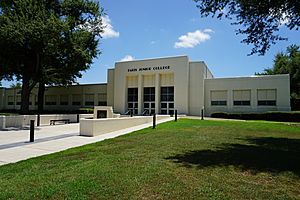 Paris Junior College was established in 1924. In 1990, it was one of the oldest junior colleges in Texas. Its main campus had 20 buildings, including a new $1.1 million physical education center, and the college offered both technical and academic instruction.

Its jewelry technologies department, now known as The Texas Institute of Jewelry Technology at Paris Junior College, is internationally recognized as one of the premier jewelry schools in the world.

Paris Junior College Dragon's Men's basketball team won the NJCAA national championship in 2005. During the 1960s through the 1980s, the school boasted nationally ranked men's Tennis programs. Paris Junior College has a new women's dormitory that opened up in fall of 2012, along with a new multimillion Science and Mathematics building that opened in the spring of 2013. The college has three campuses in Texas: the main one in Paris, a large campus in Sulphur Springs, and another in Greenville. Enrollment was expected to surpass 5,000 students in 2013.

The camp served as an infantry-division training camp. It was named in honor of Samuel Bell Maxey, a Major General for the Confederacy in the American Civil War and later elected from Texas to the U.S. Senate. The camp was activated on 15 July 1942 and deactivated 1 October 1945. It also served as an internment center for many German prisoners of war.

In the 21st century, Camp Maxey is maintained by a Texas Army National Guard unit, who regularly conduct training exercises. The Camp is garrisoned normally by a force of 10 men. Civil Air Patrol's Texas Wing also regularly uses the camp for training events.

In June 2008, when word came that over 600 American service personnel were coming to receive training for the war in Iraq, residents of the city of Paris adopted them. They donated what they thought the troops would need in order to enjoy their time in Paris before being sent to the war.

Paris, Texas was named "Best Small Town in Texas" by Kevin Heubusch in his book The New Rating Guide to Life in America's Small Cities (1997).

Since 1869, The Paris News has served as the newspaper in the city of Paris. It circulates daily in the city and throughout Lamar County as well as in neighboring Delta County, Fannin County, Red River County and Choctaw County, Oklahoma.

Paris is served by KXII, the low-power translator station KXIP-LD (channel 12) is in Paris.

Paris has a humid subtropical climate (Cfa in the Koeppen climate classification). It is located in "Tornado Alley", an area largely centered in the middle of the United States in which tornadoes occur frequently because of weather patterns and geography. Paris is in USDA plant hardiness zone 8a for winter temperatures. This is cooler than its southern neighbor Dallas, and while similar to Atlanta, Georgia, it has warmer summertime temperatures. Summertime average highs reach 94 F and 95 °F (35 °C) in July and August, with associated lows of 72 and 71. Winter temperatures drop to an average high of 51 and low of 30 in January. The highest temperature on record was 115, set in August 1936, and the record low was −5, set in 1930. Average precipitation is 47.82 inches (1,215 mm). Snow is not unusual, but is by no means predictable, and years can pass with no snowfall at all.

There were 10,570 households, of which 29.4% had children under the age of 18 living with them, 42.7% were married couples living together, 17.0% had a female householder with no husband present, and 36.5% are classified as non-families by the United States Census Bureau. Of 10,570 households, 385 are unmarried partner households: 349 heterosexual, 14 same-sex male, and 22 same-sex female households. 32.5% of all households were made up of individuals and 15.2% had someone living alone who was 65 years of age or older. The average household size was 2.35 and the average family size was 2.97. 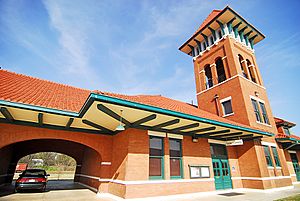 According to the Texas Transportation Commission, Paris is the second-largest city in Texas without a four-lane divided highway connecting to an Interstate highway within the state. However, those traveling north of the city can go into the Midwest on a four-lane thoroughfare via US 271 across the Red River into Oklahoma, and then the Indian Nation Turnpike from Hugo to Interstate 40 at Henryetta, which in turn continues as a free four-lane highway via US 75 to Tulsa. 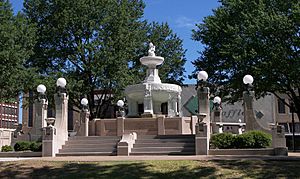 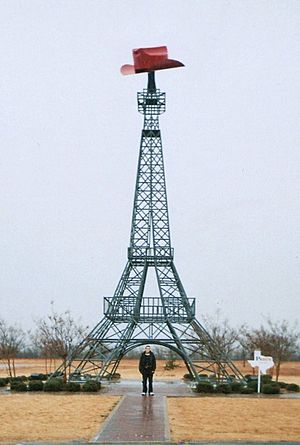 70-foot Paris Eiffel Tower with the red cowboy hat at its summit.

All content from Kiddle encyclopedia articles (including the article images and facts) can be freely used under Attribution-ShareAlike license, unless stated otherwise. Cite this article:
Paris, Texas Facts for Kids. Kiddle Encyclopedia.