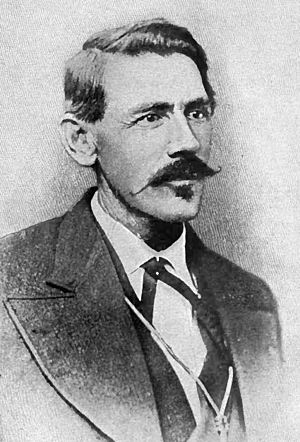 Portrait of John Simpson Chisum from The Story of the Outlaw

John Simpson Chisum (August 16, 1824 – December 22, 1884) was a wealthy cattle baron in the American West in the mid-to-late 19th century. He was born in Hardeman County, Tennessee, and moved with his family to the Republic of Texas in 1837, later finding work as a building contractor. He also served as county clerk in Lamar County. He was of Scottish, English, and Welsh descent.

In 1854, Chisum became engaged in the cattle business and became one of the first to send his herds to New Mexico Territory. He obtained land along the Pecos River by right of occupancy and eventually became the owner of a large ranch in the Bosque Grande, about forty miles south of Fort Sumner, with over 100,000 head of cattle. In 1866-67, Chisum formed a partnership with cattlemen Charles Goodnight and Oliver Loving to assemble and drive herds of cattle for sale to the United States Army in Fort Sumner and Santa Fe, New Mexico, to provide cattle to miners in Colorado as well as provide cattle to the Bell Ranch.

A gambler, Chisum frequently played poker with John Horton Slaughter, a lawman in Texas and later the Arizona Territory.

All content from Kiddle encyclopedia articles (including the article images and facts) can be freely used under Attribution-ShareAlike license, unless stated otherwise. Cite this article:
John Chisum Facts for Kids. Kiddle Encyclopedia.