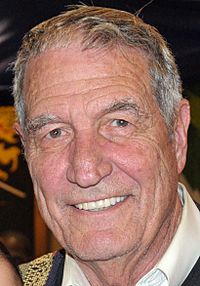 Stallings' 1992 Alabama team completed a 13–0 season with a win in the Sugar Bowl over Miami and was named the consensus national champion. Stallings was also a member of the Board of Regents of the Texas A&M University System.

Stallings was inducted into the College Football Hall of Fame as a coach on July 16, 2011.

All content from Kiddle encyclopedia articles (including the article images and facts) can be freely used under Attribution-ShareAlike license, unless stated otherwise. Cite this article:
Gene Stallings Facts for Kids. Kiddle Encyclopedia.