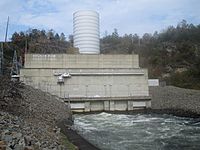 Broken Bow Reservoir is located within the state park. 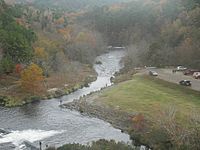 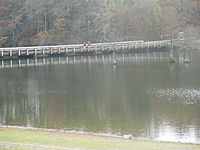 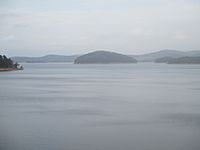 A vista of Broken Bow Lake

National Public Radio reported that the park generated $1,787,731 in 2011, excluding $414,255 in revenue from Lakeview Lodge. Thus, gross earnings were around $2.3 million. The report did not list the number of visitors, but stated that this had the second highest attendance of any Oklahoma state park during the year. 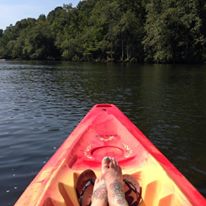 Beavers Bend State Park offers a variety of individual and group activities. Eagle watches are available from November through February. Trout fishing, fly fishing clinics, guided horseback rides, and hayrides throughout the park are other activities offered at Beavers Bend.

The David L. Boren Trail offers 16 miles (26 km) of hiking trails with 4 miles (6 km) of multi-purpose trails that wander along ridge tops, over creek bottoms, through tall stands of timber, and into areas so remote one can almost experience what early-day explorers must have felt upon seeing the Ouachita National Forest for the first time. The same trail can also be divided into a variety of short and long hikes for those not wishing to make the entire trek.

Visitors to the Forest Heritage Center's museum will find historical documents, antique forestry tools, wood art, homestead memorabilia, and a research library filled with books, periodicals, and other materials pertaining to forestry, the primary industry of the area.

The Center is also home to 14 dioramas (painted by Harry Rossoll of Atlanta, Georgia, the artist who created Smokey Bear) that cover prehistoric forests, Caddo Indians, Papermaking in the South, 1940s lumbering, and forest appreciation. Each diorama is accompanied by a taped narration. In June 2003 an eight-foot-tall bronze sculpture was unveiled, honoring the memory of Jim Burnett and all people who risk their lives fighting wildland fires each year. Burnett was the first forest firefighter from Oklahoma to lose his life in the line of duty and one of the many firefighters dispatched by the state of Oklahoma to battle an outbreak of wildfires in Wyoming during the summer of 2000. Burnett lost his life on August 11, 2000 fighting the Kate's Basin Fire near Thermopolis, Wyoming.

Each year some 60 million cubic feet (1,700,000 m3) of lumber is harvested in McCurtain County. The forest industry is the area's largest business concern, and great care is taken to ensure the prolonged health of local pine and hardwood forests.

An example of the area's geology

Built on the site of an old Choctaw settlement, Beavers Bend State Park was named after John T. Beavers, a Choctaw intermarried citizen. The "bend" in the park's name refers to an area of the park where a portion of Mountain Fork River meanders sharply, making an almost 180-degree turn. This area is commonly known as the River Bend, and is a popular area for trout fishing, canoe rentals, and swimming. Also in the River Bend area is the Broken Bow Hydroelectric Plant, which generates energy from the waters of Broken Bow Lake.

The local rock formations are some of the most distinctive in the state of Oklahoma. Just north of Broken Bow, sedimentary rock has been thrust upward due to an ancient collision of the North American and South American Plates, forming what is now the Ouachita Mountains. Evidence of what is called the Ouachita orogeny can be seen all over the park, where some layers of rock can be seen tilted up at angles of about sixty-degrees. These geologic features can be easily viewed around Broken Bow Lake and Mountain Fork River, where erosion has left much of the rock exposed. The unique geology of the area inspires frequent field trips by geology students from numerous colleges and universities.

All content from Kiddle encyclopedia articles (including the article images and facts) can be freely used under Attribution-ShareAlike license, unless stated otherwise. Cite this article:
Beavers Bend Resort Park Facts for Kids. Kiddle Encyclopedia.