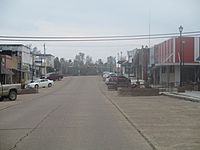 A portion of downtown Broken Bow

Broken Bow is a city in McCurtain County, Oklahoma, United States. The population was 4,120 at the 2010 census. It is named after Broken Bow, Nebraska, the former hometown of the city's founders, the Dierks brothers. Other Dierks-associated legacies in town include Dierks Elementary School, Dierks Street, and Dierks Train #227 which is preserved in Broken Bow.

The land that would become Broken Bow was owned by the Choctaw tribe prior to being settled by non-Indians. Growing around a lumber company started by two brothers, Broken Bow had a population of 1,983, just a decade after its incorporation in 1911. The city lies within the Little Dixie region of Oklahoma, an area originally settled largely by Southerners seeking a new start following the American Civil War.

The city of Broken Bow stands in a unique transition zone between the Red River basin and the Ouachita Mountains. While the Ouachita Mountains are sandstone ridges that are considered the roughest land in Oklahoma, the Red River basin is considered fertile. North of Broken Bow is Broken Bow Lake, created by the United States Army Corps of Engineers by damming the Mountain Fork River. The lake's creation forced Hochatown to relocate to its present-day location.

For the past ten years, Broken Bow High School Band has received Superior Rating at the McAlester Regional Marching Contest and have placed in class 4A in every marching competition that they competed in this past season. The Band was originally known as the "Savage Pride" before it was changed in 2006 to the "Black and Gold Regiment."

In recent years, Broken Bow has seen a tremendous economic boom through the development of its timber and tourism industries. The town is also home to a chicken-processing plant owned by Tyson Industries. 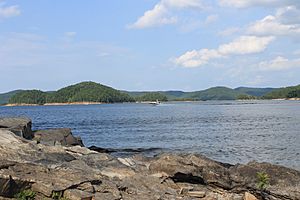 In addition to being home of Broken Bow Lake, the city is a gateway for tourists visiting Beavers Bend Resort Park, Hochatown State Park, and Cedar Creek Golf Course at Beavers Bend. Hunters also visit the region, which bills itself as the "deer capital of the world."

Broken Bow is home to two museums containing Native American artifacts. The Gardner Mansion and Museum was the historic home of the "Chief of the Choctaws" and was built in 1884. The Indian Memorial Museum houses pre-historic Indian pottery, fossils, Quartz crystal and antique glass.

The forest industry is by far the area's largest business concern. Each year some 60 million cubic feet (1,700,000 m3) of lumber are harvested in McCurtain County, and great care is taken to ensure the prolonged health of local pine and hardwood forests. The Oklahoma State Department of Agriculture Forestry Division and United States Forest Service have a large presence in the area and are constantly surveying the area forests in order to prevent wildfires.

Weyerhaeuser Company operates a large plant in nearby Idabel, and International Paper also operates a large mill in Valliant. Additionally, Weyerhaeuser maintains several pine tree plantations throughout McCurtain County. Pan Pacific operates a fiberboard plant on the west side of Broken Bow. Huber Engineered Woods is the latest big player to enter the area, with a very large oriented strand board (OSB) plant, also on the west side of Broken Bow. Huber plans to employ about 160 people at the site and expects to create another 250 jobs within the local community.

All content from Kiddle encyclopedia articles (including the article images and facts) can be freely used under Attribution-ShareAlike license, unless stated otherwise. Cite this article:
Broken Bow, Oklahoma Facts for Kids. Kiddle Encyclopedia.