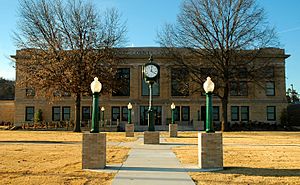 The foothills of the Kiamichi Mountains sit within Haskell County, Northern Le Flore County, and Northern Pittsburg County. Its peaks, which line up south of the Kiamichi River, reach 2,500 feet in elevation. The range is the namesake of Kiamichi Country, the official tourism designation for southeastern Oklahoma.

Substantial portions of the mountains are owned by timber companies, who operate massive tree plantations consisting of fast-growing pine trees. Logging is the region’s chief industry.

Portions of the mountains are protected by the Upper Kiamichi River Wilderness National Wildlife Refuge and the Ouachita National Forest. The wildlife refuge includes much of the Kiamichi River’s upper reaches and headwaters.

Due to the restricted nature of land ownership in the region—with much of it owned by the federal government or timber companies—the Kiamichi Mountains remain rustic, rural, economically undeveloped and with few population centers.

All content from Kiddle encyclopedia articles (including the article images and facts) can be freely used under Attribution-ShareAlike license, unless stated otherwise. Cite this article:
Kiamichi Mountains Facts for Kids. Kiddle Encyclopedia.