Poteau was founded in 1885, its name being derived from the nearby Poteau River. A group of French explorers gave the river its present name during the early 18th Century. Poteau is a French word meaning post.

The Fort Smith and Southern Railway built a rail line through the Poteau area in 1886–1887, en route to Paris, Texas, including a station within the city itself. The Poteau post office opened in 1887 and the Kansas City, Pittsburg and Gulf Railroad (acquired by the Kansas City Southern Railway in 1900) began serving the town in 1896. Poteau was officially incorporated in 1898. 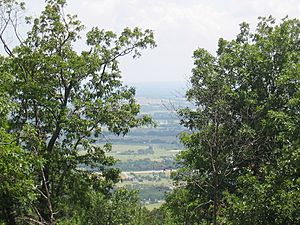 The city is located in the valley below Cavanal Hill, the "World's Highest Hill."

The Poteau River, the only river in Oklahoma that flows north, is located near the city. It flows into Arkansas where it meets with the Arkansas River at Belle Point in Fort Smith.

In 1955, Dr. John Montgomery, a black veterinarian, petitioned the Poteau Public School Board to eliminate the racial segregation of its schools. The board approved his petition, resulting in the integration of the school system and marking Poteau as the first city in Oklahoma to allow African Americans to learn alongside white students in its primary and secondary schools.

Carl Albert State College, formerly known as Poteau Junior College, is one of the 13 state colleges found in Oklahoma.

Kiamichi Technology Center, the largest division of the Oklahoma CareerTech System has a branch location in Poteau.

All content from Kiddle encyclopedia articles (including the article images and facts) can be freely used under Attribution-ShareAlike license, unless stated otherwise. Cite this article:
Poteau, Oklahoma Facts for Kids. Kiddle Encyclopedia.