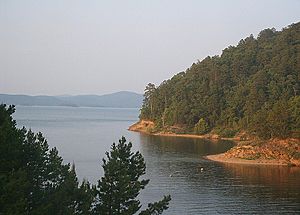 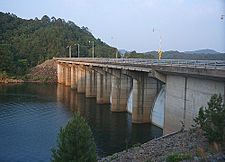 North side of the spillway at Broken Bow Lake 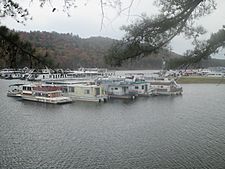 Broken Bow Lake is a reservoir in southeastern Oklahoma, located on Mountain Fork River and 9 miles (14 km) northeast of the town of Broken Bow in McCurtain County. It is one of the largest fresh water lakes within the state of Oklahoma, and a popular tourist destination for locals and visitors from neighboring Texas and Arkansas.

The lake stretches 22 miles (35 km) back into the Ouachita Mountain country where its unusual beauty and scenic appeal beckons all sorts of nature enthusiasts. The mountain terrain is densely forested and there are many species of birds native to the area for birdwatchers to enjoy.

Points of historical interest located on or near Broken Bow Lake are old Hochatown, inundated by the lake, which was settled by the Choctaw Indians in the early 1830s. The Choctaws incorporated the area into Bok Tuklo County, a part of the Apukshunnubbee District of the Choctaw Nation.

Broken Bow, center of the Oklahoma timber production, was named by the Dierks brothers, pioneer lumbermen, for their original home of Broken Bow, Nebraska. The Broken Bow post office was established in 1911. Idabel, seat of McCurtain County was first named Purnell, after Isaac Purnell, a railroad official. When postal officials rejected that designation, the name was changed to Mitchell, honoring another railroad company officer. Postal officials also rejected that because another post office of the same name existed elsewhere in the territory. They named the post office Bokhoma (a Choctaw word meaning Red River), which opened December 15, 1902. Railroad officials then chose the name Idabel, a compound of the names of Isaac Purnell's two daughters, Ida and Bell. The post office was then renamed Idabel.[3]Located nearby at the site of an old Choctaw settlement is Beavers Bend Resort Park, named for John T. Beavers, a Choctaw intermarried citizen.

Construction began in October 1961 by contractor Nello L. Teer Company of Durham, North Carolina; impoundment began in October 1968, and the conservation pool was filled in April 1970. The first power unit was put on line in January 1970, and the second unit in June 1970.

All content from Kiddle encyclopedia articles (including the article images and facts) can be freely used under Attribution-ShareAlike license, unless stated otherwise. Cite this article:
Broken Bow Lake Facts for Kids. Kiddle Encyclopedia.