Northeast Texas is a region in the northeast corner of the U.S. state of Texas. It is geographically centered on two metropolitan areas strung along Interstate 20: Tyler in the west and Longview/Marshall to the east. Mount Pleasant, Sulphur Springs, Paris and Texarkana in the north primarily along Interstate 30, Jacksonville and Palestine to the south are also major cities within the region. Most of Northeast Texas is included in the interstate region of the Ark-La-Tex.

Its climate is warmer and wetter than most of Texas and its geography is more hilly and forested. Its culture is similar to that of Southeast Texas, but does not have as much of a Cajun influence. Many of the largest cities in Northeast Texas outside Dallas still follow a rural Southern way of life, especially in dialect, mannerisms, religion, and cuisine.

The geography is composed mainly of the Piney Woods, a mixed forest of deciduous and conifer flora. The Piney woods cover 23,500 square miles (60,900 km²) of gently rolling or hilly forested land. These woods are part of a much larger region of pine-hardwood forest that extends into Louisiana, Arkansas, and Oklahoma. Northeast Texas lies within the Gulf Coastal Plain and receives more rainfall, 35 to 50 inches (890 to 1270 mm), than the rest of Texas.

The Sabine River is the major river in Northeast Texas, and flows through Longview and several other cities. The Red River also flows through the region and forms the northern border with Oklahoma and a portion of Arkansas. In Northeast Texas and the rest of the South, small rivers and creeks collect into swamps called "bayous" and merge with the surrounding forest. Bald cypress and Spanish moss are the dominant plants in bayous. The most famous of these bayous in Northeast Texas is the Cypress Bayou surrounding the Big, Little, and Black Cypress rivers around Jefferson. They flow east into Caddo Lake and the adjoining wetlands cover the rim and islands of the lake. 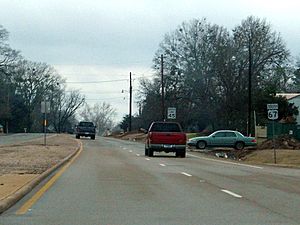 Culturally Northeast Texas is more closely akin to Arkansas, Louisiana, and even Mississippi than it is with West Texas. Northeast Texas is in the Bible Belt creating a strong Fundamentalist Christian sentiment. Though 35 percent of Texas's population is now Hispanic, African-Americans are still the most populous minority in Northeast Texas. During the Civil Rights Movement several communities clashed over integration. In presidential elections since 1950 both Smith County (County-seat Tyler), and Gregg County (County-seat Longview) have been reliably Republican.

Much of modern Northeast Texas culture has its roots in traditions that go back for generations.First Monday Trade Days is a monthly flea market held in Canton, Texas. The market is actually held on the Thursday through Sunday preceding the first Monday of each month. It purports to be the largest and oldest continually operated flea market in the United States, and is a highly popular event in the area.

The East Texas Oil Museum, located on the campus of Kilgore College in Kilgore, Texas. It houses the authentic re-creation of oil discovery and production in the early 1930s from the largest oil field inside U.S. boundaries.

Tyler, Texas has a rich culture and has been nicknamed the "Rose Capital of America" because of its large role in the rose-growing industry; about 20% of commercial rose bushes produced in the U.S. are grown in Tyler and Smith County and more than half of the rose bushes are packaged and shipped from the area. It boasts the nation's largest municipal rose garden and hosts the Texas Rose Festival each October, which draws more than 100,000 spectators annually. 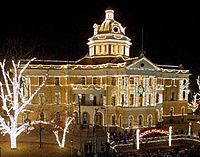 The Old Courthouse in Marshall during the Wonderland of Lights, the largest light festival in Northeast Texas. Tourism is one of Northeast Texas's most important industries.

The region is unique in that it is the only portion of East Texas that is not within the direct sphere of influence of either Dallas/Fort Worth or Houston. This generally weakens the area's visibility as areas in the south ally themselves with Houston and areas to the west ally themselves with Dallas. These areas are on the fringe of those cities spheres of influence, and therefore not as visible as smaller cities such as Grapevine or Deer Park which are closer to the respective centers of power.

In the mid-19th century, Marshall and Jefferson constituted a sphere of influence that led the entire state into the Confederacy and during the Mexican and Republic periods Nacogdoches and San Augustine were the most developed and influential cities in Northeast Texas. Nacogdoches rebelled against Mexican rule in the Fredonian Rebellion and had one of the first newspapers to run the phrase Remember the Alamo!. While none of these three cities are a major population center, in their own right on the state level any longer, all four are still major cultural centers; with Nacogdoches, & Tyler being well established centers of higher learning.

Today, Tyler and Longview are the largest cities in Northeast Texas with Tyler having a larger population. The Tyler MSA is 209,714, and the Longview MSA is 206,874. Tyler has succeeded in establishing itself as the regional hub thanks to its expansive medical and higher education community. Tyler has a general partnership with Jacksonville while Longview has leaned more and more toward cooperation with its traditional rival Marshall. The Nacogdoches/Lufkin area is not yet considered to be a metropolitan area. 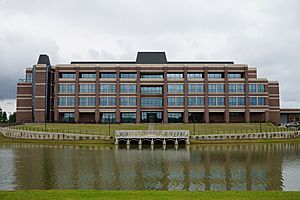 The community colleges of Northeast Texas share a history of emerging from the "junior college" movement of schools focused on providing the first two years of the college degree. Although most added technical programs with associate of applied science degrees following the community college movement of the 1960s, the schools still place a strong emphasis on liberal arts and the academic associate of arts and associate of science degree programs. They often include the full range of college sports, including football, and host dormitories, and are known for their "high kicking" drill teams. Community colleges in the region include Kilgore College, Paris Junior College, Northeast Texas Community College near Mt. Pleasant, Texarkana College, Panola College in Carthage, Tyler Junior College, Trinity Valley Community College in Athens and with campuses in Terrell and Palestine, and Angelina College in Lufkin. Jacksonville hosts the two smaller private two-year colleges of the region, Jacksonville College (Baptist) and Lon Morris College.

All content from Kiddle encyclopedia articles (including the article images and facts) can be freely used under Attribution-ShareAlike license, unless stated otherwise. Cite this article:
Northeast Texas Facts for Kids. Kiddle Encyclopedia.