Kids Encyclopedia Facts
For other places with the same name, see Greenville (disambiguation).

Greenville is a North Texas city located in central Hunt County, approximately 45 miles from Dallas. It is the county seat and largest city of Hunt County. As of the 2010 census, the city population was 25,557.

Greenville was named for Thomas J. Green, a general in the Texas Army during the war for independence from Mexico.

Greenville is considered to be a part of the humid subtropical region. Due to its location on the north Texas prairies the climate is typically windy. 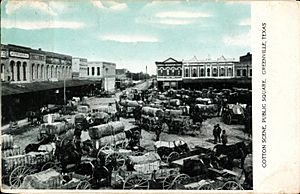 Greenville was founded in 1846. The city was named after Thomas J. Green, a significant contributor to the establishment of Texas as a Republic. He later became a member of the Congress of the Republic of Texas. The city was almost named “Pinckneyville” in honor of James Pinckney Henderson, the first Governor of Texas.

As the Civil War loomed, Greenville was divided over the issue of secession, as were several area towns and counties. Greenville attorney and State Senator Martin D. Hart was a prominent Unionist. He formed a company of men who fought for the Union in Arkansas, even as other Greenville residents fought for the Confederacy. The divided nature of Greenville, Hunt County and the State of Texas is noted by an historical marker in "The SPOT" Park at 2800 Lee Street in downtown Greenville. In the post-Civil War era, Greenville's economy became partly dependent on cotton as the local economy entered a period of transition.

In World War II, the Mexican Escuadrón 201 was stationed in Greenville while training at nearby Majors Field.

The town was also famous for a large sign, installed on July 7, 1921 over Lee Street, the main street in the downtown district, between the train station and the bus station in the 1920s to 1960s. The sign read: "Welcome to Greenville, The Blackest Land, The Whitest People." The original intent behind "the whitest people" was to define "the citizens of Greenville as friendly, trustworthy and helpful was sincere, and it was meant to include all citizens, regardless of race." However, the sign subsequently acquired racial overtones, and the original sign was taken down and placed into storage on April 13, 1965, possibly at the urging of Texas Governor John Connally, who had made a visit to the town weeks before. In 1968, Greenville Sybil Maddux had the sign reinstalled, with the wording modified to read "The Greatest People"; the original sign is in the collection of the Audie Murphy American Cotton Museum.

In 1957, Greenville annexed the small town of Peniel, Texas, which had been founded in 1899 as a Pentecostal Church of the Nazarene community centered around Texas Holiness University. The annexation was approved by the citizens of Peniel, which at the time had a population of about 157.

On May 12, 2011, a white buffalo was born near Greenville, Texas during a thunderstorm on the ranch of Arby Littlesoldier, who identified himself as a great-great grandson of Sitting Bull. A public naming ceremony and dedication was held on June 29, 2011 during which the male calf was officially given the title "Lightning Medicine Cloud." However, on August 21, 2012, 'Lightning Medicine Cloud' died. The Sheriff's department declared it had died from a bacterial infection, but the owners disagree, claiming that the buffalo was allegedly skinned by an unknown party.

There were 9,156 households out of which 31.7% had children under the age of 18 living with them, 49.4% were married couples living together, 13.9% had a female householder with no husband present, and 32.6% were non-families. 28.6% of all households were made up of individuals and 11.8% had someone living alone who was 65 years of age or older. The average household size was 2.56 and the average family size was 3.13.

Commercial and residential developments line the interstate from Monty Stratton Parkway through Lamar Street. The frontage roads have recently been converted to one-way for safety due to increased traffic.

The nearest airports with passenger air service are

Majors Field Airport is a municipal airport located in Greenville. 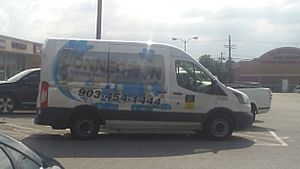 A Connection Bus in Greenville.

A public transit called The Connection serves Greenville and all of Hunt County. The transit operates Monday through Friday from 7am-7pm. Reservations have to be made one day in advance and the transit charges $2 ($4 round trip) if the passenger is traveling to a place within the same community or city, and $3 ($6 round trip) if the passenger is traveling from one city or community to another within Hunt County. Also, the transit will take Hunt County residents to Dallas, this is offered round trip only, passengers are charged $34, and a minimum of three passengers is also required.

All content from Kiddle encyclopedia articles (including the article images and facts) can be freely used under Attribution-ShareAlike license, unless stated otherwise. Cite this article:
Greenville, Texas Facts for Kids. Kiddle Encyclopedia.