Commerce is a Texas city located in Hunt County, Texas, United States, situated on the eastern edge of North Texas, in the heart of the Texas Blackland Prairies, and the northeastern part of the Dallas/Fort Worth Metroplex. The town is 60 miles (100 kilometers) from Dallas, Texas, and 45 mi (72 km) south of the Texas/Oklahoma border. Commerce is the second largest city in Hunt County with a population of 8,599 residents as of 2014. The rural city is home to Texas A&M University–Commerce, a major 4-year University of over 12,000 students that has been in the town since 1894. Commerce is one of the smallest college towns in Texas. 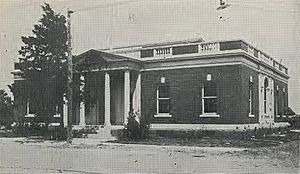 The town of Commerce was formed when two merchants named William Jernigan and Josiah Jackson established a trading post and mercantile store located where the present day downtown area is. The rural area just to the northeast of the area was an open prairie area originally known as Cow Hill. The town was established in 1872 and named Commerce due to the thriving economic activity, and cotton fields and ideal farm and ranch lands between the Middle and South Sulphur rivers on the rich, black gumbo prairie in northeast Hunt County. The town incorporated in 1885. Two years later, a railroad was built through Commerce to transport merchandise from Fort Worth, and nine years later, William L. Mayo, a college educator, moved East Texas Normal College from the Northeast Texas town of Cooper to Commerce after the original school in Cooper was destroyed in a fire. Mayo continued as president of the college, now known as Texas A&M University–Commerce, until his death in 1917 and is buried on the campus grounds. 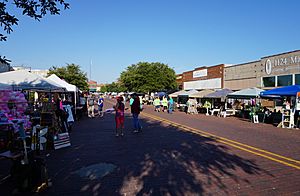 Commerce was named the “Bois d’Arc Capital of Texas” (pronounced "bow-dark") by the Texas Legislature because of its location in the geographic center of the indigenous range of the bois d'arc tree. The second largest bois d’arc tree in Texas “Big Max”, recognized by the National Forests Famous and Historic Trees, is located within the city limits. Held every September, the annual festival Bois d’Arc Bash pays homage to bois d’arc trees which played a vital part in the frontier days, providing foundations, fences and weapons of the Native Americans. The Bash celebrates with arts & crafts vendors, food, parade, kid's game area, pageant, wine, musical entertainment, 5K run, and car & truck show. 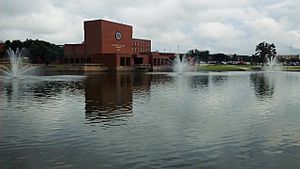 Commerce's climate is considered to be part of the humid subtropical region. The temperature varies greatly throughout the year. Commerce has hot, humid and dry Summers, typical of much of Texas and above average Spring temperatures. Commerce has cooler fall and Winter temperatures with higher wind chills due to its northern location and location on a natural prairie. During the Spring is the strongest part of the storm season as thunderstorms are very common and Tornadoes have been known to form in and around the area.

There were 2,881 households out of which 28.4% had children under the age of 18 living with them, 35.0% were married couples living together, 14.0% had a female householder with no husband present, and 47.1% were non-families. 36.1% of all households were made up of individuals and 10.1% had someone living alone who was 65 years of age or older. The average household size was 2.27 and the average family size was 3.02. 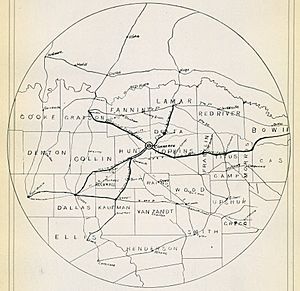 1920 map of Commerce and surroundings

Commerce is served by the following Highways:

Business 11–A business route of highway 11 through Commerce along Maple Street, Park Street, and Wolfe City Drive, this route was formerly a part of highway 11 before it was rerouted to run concurrent with Loop 178 and Highway 24. 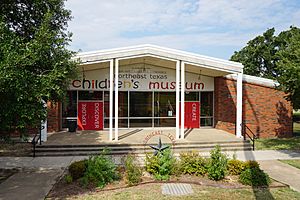 The city of Commerce is home to the Northeast Texas Children's Museum. The museum provides playful and creative learning experiences for children. There are many hands-on exhibits and programs that cater to children between ages 2 through 10. Many school districts from the Dallas/Fort Worth Metroplex and the Northeast Texas area visit the museum. 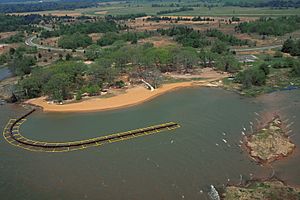 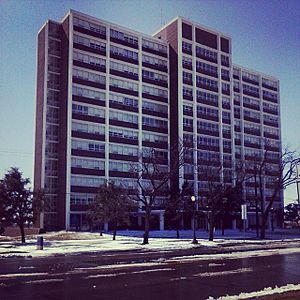 The most notable landmark of the city of Commerce is the high-rise 12 story building located on the A&M-Commerce campus. This building is called Samuel H. Whitley Hall and is the tallest building between Dallas and Texarkana. The building is named in honor of former university president Samuel Whitley, who served as president of the university from 1924–1946. This 146 foot tall building serves as a dormitory for traditional freshmen on campus.

All content from Kiddle encyclopedia articles (including the article images and facts) can be freely used under Attribution-ShareAlike license, unless stated otherwise. Cite this article:
Commerce, Texas Facts for Kids. Kiddle Encyclopedia.