Sulphur Springs is a city in Hopkins County, Texas, in the United States. As of the 2010 census, the city population was 15,449. It is the county seat of Hopkins County.

Sulphur Springs derives its modern name from the fact that when the area was first settled, springs of sulfur water were abundant. Long before the first European-American settlers arrived, Native American tribes had occupied the areas around the springs and used them for their therapeutic value.

The settlers also gathered around the springs. The town developed around this area from the late 1840s.

Eli Bib, one of the first European-American settlers, ran a store from his cabin, selling staples, whiskey, persimmon beer, and slabs of ginger cake. In 1849, Dr. and Mrs. Davis moved into the area. Dr. Davis envisioned the spot as a future city. In 1850 the residents organized the area's first church, the Methodist Episcopal. Construction of the church was completed in 1853. In 1852, the Presbyterian Church was organized. At that time, the population of the village was 441. In order to serve the growing group of people, commodities began to be brought in from nearby Jefferson. New stores were established.

The village became a city in 1854 when the first United States post office was established. The city's name was originally Bright Star. Mail to and from the city was delivered by the Pony Express. On May 18, 1871, the legislature moved the county seat of Hopkins county from Tarrant to Sulphur Springs, and the name "Bright Star" was removed from the postal directory. 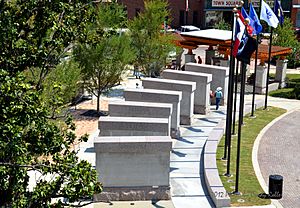 Local government organized slowly. The first known mayor was William A. Wortham. In 1854, Wortham had bought the Texas Star press and moved to Sulphur Springs. He, his brother-in-law, and Bill Davis established the city's first newspaper. 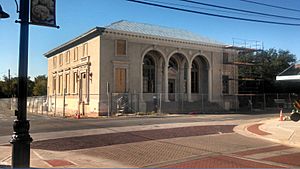 Building being rehabilitated as the new City Hall

The county seat had numerous newspapers. Echo Publishing Company was founded in 1897. It was the first steam-powered press in Sulphur Springs. After the first plant was lost to a fire, a new plant was constructed which used gasoline as fuel. In 1884 the Sulphur Springs Enterprise was founded. In the same year, James Harvey "Cyclone" Davis, a Populist US Congressman, founded the Alliance Vindicator; it was published until 1901. John S. Bagwell bought the Hopkins County Echo in 1916. In 1924, the Texas Star was merged into the Daily News Telegram. The Daily News Telegram later was renamed as the Daily Gazette and later the Weekly Gazette. Eventually, all these newspapers were merged into the Sulphur Springs News-Telegram and the Hopkins County Echo, both of which still operate.

In 1857 the city set aside ten acres (40,000 m²) of land for Bright Star University. The Sulphur Springs District Conference High School began in 1877, established on Bright Star University land on College Street. In December 1882, the school became known as Central College. It was owned by the Methodist Episcopal Church. It was later renamed Eastman College and Conservatory of Music and Art under a new charter and after the leading professor. Before the year 1900, the college burned and Professor Eastman left the area.

The First National Bank of Sulphur Springs received its National charter in 1855. It is now known as City National Bank.

In 1857 the area's first steam-powered factory was established by the Bell brothers. In the same year, the Morro Castle was built on North Street. Its builders remain unknown.

C. Denton was elected to lead the new city government, which was incorporated during the Reconstruction Era. During the Civil War, the town had lost its charter and had to be incorporated again by the state legislature.

In 1868, Union troops moved into Sulphur Springs and occupied the city for a period of two years during Reconstruction, in an effort to protect freedmen after emancipation. Upon their departure and the end of the military occupation, A. J. Bridges was elected as mayor.

The construction of a railroad line from Mineola, Texas in 1872 stimulated growth in the city. Settlers were drawn by tales of the healing powers of the city's sulphur baths. Due to population growth, the springs of sulphur were gradually covered. None are active today. A rail was run from Jefferson to Sulphur Springs in 1879. The St. Louis, Arkansas & Texas Railroad (Cotton Belt) was built through Sulphur Springs in 1887 on its way to Commerce and Sherman. The next year the line was completed to Fort Worth, connecting the city to a major market. In 1891 the bankrupt railroad was sold to Jay Gould interests and renamed as the St. Louis Southwestern Railway. 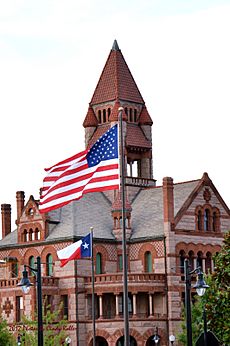 An ice plant was built in 1887. The city's courthouse, which is still used today, was constructed in 1895. In 1904, wells were dug to supply the city with water. In the same year, a long distance telephone line was run to nearby Greenville. In 1889, the City National Bank was organized.

After World War II, the city adopted a new Council-manager type of government. It stimulated new programs. Industrialization brought new plants and factories to the city. The population has grown as a result. In 2015 it was estimated at approximately 16,000.

The dairy industry was a major component of the local economy from the late 1940s through 1995. The Southwest Dairy Museum in the city features artifacts on the history of the dairy industry. The dairy industry began to shrink largely because of declining milk prices, higher labor costs, and large corporations operating industrial-scale dairies. 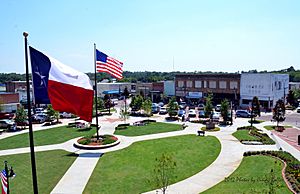 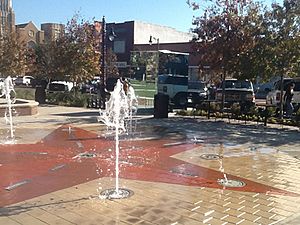 There are several parks in the city and area that feature recreational opportunities:

Sulphur Springs is considered to be part of the humid subtropical area.

There were 5,959 households out of which 30.0% had children under the age of 18 living with them, 46.1% were married couples living together, 15.5% had a female householder with no husband present, and 33.1% were non-families. 28.4% of all households were made up of individuals and 11.9% had someone living alone who was 65 years of age or older. The average household size was 2.53 and the average family size was 3.1 people.

Greyhound provides daily service to Dallas and points west, and Texarkana, Arkansas and all points east. There is no bus depot in Sulphur Springs proper. The Greyhound buses stop at the Pilot truck stop.

Amtrak does not directly serve Sulphur Springs. Its Texas Eagle train stops in nearby Mineola, Texas, with daily service to San Antonio and Chicago, and thrice-weekly service to Los Angeles.

Sulphur Springs served by the following highways that run through the city:

The city is also served by a municipal airport. It was named Texas Airport of the Year for 2003 by the Federal Aviation Administration.

Railroad Service is provided by the Kansas City Southern Railroad and the shortline Blacklands Railroad is based in Sulphur Springs.

All content from Kiddle encyclopedia articles (including the article images and facts) can be freely used under Attribution-ShareAlike license, unless stated otherwise. Cite this article:
Sulphur Springs, Texas Facts for Kids. Kiddle Encyclopedia.