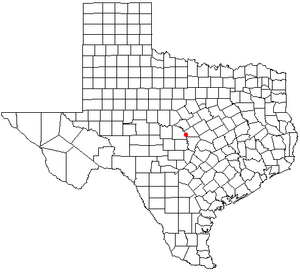 Location of Bend in the state of Texas.

Bend is an unincorporated community in Lampasas and San Saba Counties in Western Central Texas. The population was 1,678 as of the 2010 census. It is located on Farm to Market Road 580 on the western leg of a horseshoe-shaped bend in the Colorado River. The Lampasas County portion of Bend is part of the Killeen–Temple–Fort Hood Metropolitan Statistical Area.

Settlement of the area began in the mid-19th century. In 1854, the community took the name Schleicher's Bend, after an early settler Gustav Schleicher. By 1856, it was called McAnelly's Bend after Robert Daugherty McAnelly, a landowner on the Lampasas side of the river. The community exists on both sides of the Colorado River, the Lampasas (west) side of the river is known locally as "Little Bend".

When the application for a post office on the San Saba side of the river was made in the late 1870s, the names Little Breeches and Bend were submitted; the Bend Post Office opened in 1879 and has continuously operated ever since. Bend had a population of approximately 400 in 1890. For most of the 20th century, however, the community recorded 100 to 125 residents.

Three miles south of Bend, on the Colorado River, was the Victorian resort and spa of Sulphur Springs. It fell into disuse during the Great Depression, but was revived in the 1980s as a fishing resort.

In the early 20th century, extensive pecan orchards were planted in the area. By mid-century, the Hollis native pecan had become the region's cash crop. Bend boosters consider the Jumbo Hollis, a tree whose name is derived from its unusually large fruit and its first owner, Thomas I. Hollis, to be the world's most productive pecan tree. When other native pecan trees averaged 70 to 80 nuts per pound, Jumbo's averaged 33. At the 1904 World's Fair, Jumbo Hollis pecans won the bronze medal for being the largest displayed. The tree's record year was 1919, when it produced 1,015 pounds of nuts.

All content from Kiddle encyclopedia articles (including the article images and facts) can be freely used under Attribution-ShareAlike license, unless stated otherwise. Cite this article:
Bend, Texas Facts for Kids. Kiddle Encyclopedia.