San Saba County is a county located on the Edwards Plateau in western Central Texas, United States. As of the 2020 census, its population was 5,730. Its county seat is San Saba. The county is named after the San Saba River, which flows through the county.

United Confederate Veterans organized a chapter known as the "William P. Rogers Camp" in San Saba County after the death in 1889 of Confederate President Jefferson Davis. Rogers, a hero of the Battle of Corinth in Mississippi, was a native of Georgia. He did not live in San Saba, but his daughter, Fannie, married one of Rogers' officers, George Harris, who moved there in 1880. A former county judge, Harris served as a commander of Rogers Camp, named for his father-in-law. The veterans' organization lasted until the early 1930s. 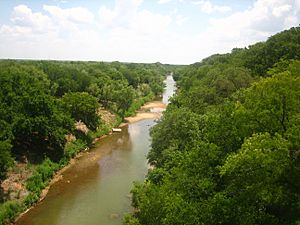 The Colorado River of Texas, from the Regency Suspension Bridge, on the border of Mills and San Saba Counties

San Saba County is home to the only suspension bridge open to traffic in the State; the Regency Bridge spanning the Colorado River, located off FM 500 in the northern part of the county, was built in 1939.

The Beveridge Bridge, built in 1896 spanning the San Saba River, was the only other suspension bridge in Texas open to traffic until 2004, when it was replaced by a concrete bridge. The Beveridge Bridge, since restored and open as a pedestrian bridge, is located on the northwest edge of the city of San Saba, on China Creek Road, just north of the Wedding Oak.

All content from Kiddle encyclopedia articles (including the article images and facts) can be freely used under Attribution-ShareAlike license, unless stated otherwise. Cite this article:
San Saba County, Texas Facts for Kids. Kiddle Encyclopedia.