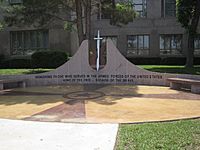 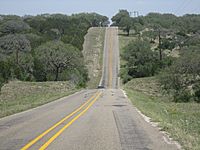 Burnet County ( BUR-nit) is a county located on the Edwards Plateau in the U.S. state of Texas. As of the 2010 census, the population was 42,750. Its county seat is Burnet. The county was founded in 1852 and later organized in 1854. It is named for David Gouverneur Burnet, the first (provisional) president of the Republic of Texas. The name of the county is pronounced with the emphasis or accent on the first syllable, just as its namesake David Burnet.

Indigenous peoples inhabit the area as early as 4500 B.C. Later known tribes in the area include Tonkawa, Lipan Apache and Comanche.

In 1852 the Fourth Texas Legislature created Burnet County from Bell, Travis and Williamson. The first post office was established at Hamilton in 1853.

After the war some former slaves left the county, but many stayed. A group of them settled on land in the eastern part of Oatmeal. In 1870 the black population of the county had increased to 358, keeping pace with the growth of the total number of residents; the number of blacks had fallen to 248 by 1880, however, and the number of new white residents was such that after 1890, blacks represented less than 3 percent of the total population. Some found work on farms and ranches, but by the turn of the century many had moved into the Marble Falls area to work in town.

All content from Kiddle encyclopedia articles (including the article images and facts) can be freely used under Attribution-ShareAlike license, unless stated otherwise. Cite this article:
Burnet County, Texas Facts for Kids. Kiddle Encyclopedia.