Bell County is a county located in the U.S. state of Texas. As of the 2010 census, its population was 310,235. Its county seat is Belton. The county was founded in 1850 and is named for Peter Hansborough Bell, the third governor of Texas.

In 2010, the center of population of Texas was located in Bell County, near the town of Holland. 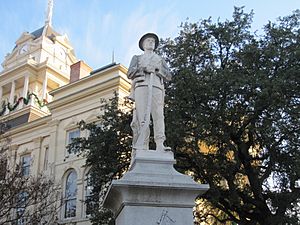 The following are major highways that run through Bell County.

The Hill Country Transit District operates a regularly scheduled fixed route bus service within the urban areas of Killeen and Temple, as well as a paratransit service throughout the county. Amtrak also has scheduled service to Temple.

All content from Kiddle encyclopedia articles (including the article images and facts) can be freely used under Attribution-ShareAlike license, unless stated otherwise. Cite this article:
Bell County, Texas Facts for Kids. Kiddle Encyclopedia.