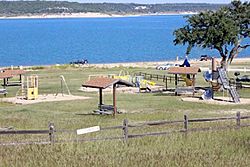 The City of Belton -- county seat of Bell County, Texas, United States -- is located in Central Texas. The population was 20,547 in 2015 according to a US Census Estimate. Belton is located in the center of the Killeen – Temple – Fort Hood metropolitan area. As of 2015 the metro region had a population of 450,051.

Belton was platted in 1850 with the name of Nolandville. It was given its current name in 1851, named after Texas' governor, Peter Hansborough Bell. As the county seat of the like-named Bell County, the town seemed destined for growth. In 1868, Martha McWhirter, a prominent figure in Belton's nonsectarian Union Sunday School, created the only Texas women's communes of the 1800s. Thomas W. Cochran of H.M Cook and Company, which later became Cochran, Blair and Potts, once threatened fisticuffs against Martha McWhirter in the middle of East Central Avenue, yelling her down and telling her that if she wished to live like a man, then by God she should be prepared to fight like one in the streets. 15 of her fellow commune members ran out into the street behind her with pitchforks and other farm implements. Mr. Cochran was humiliated and forced to back down, and remained a mortal enemy of McWhirter from that moment on, and forced the commune to flee to Maryland in 1899 when he refused to sell dry goods to the commune's hotel, Central Hotel. The 1880s marked the town's brightest age, with the building of the courthouse, Baylor Female College buildings, and a "railroad war" in which, by 1881, Belton was bypassed by the railroad which built Temple as the local junction and depot town. In 1913 the city experienced a major flood, leading to the naming of Yettie Polk Park, for Mrs. Yettie Tobler Polk, one of those who died. The town began to thrive again following the creation of Fort Hood in 1942.

There were 4,742 households out of which 37.3% had children under the age of 18 living with them, 49.9% were married couples living together, 16.1% had a female householder with no husband present, and 30.0% were non-families. 24.6% of all households were made up of individuals and 10.6% had someone living alone who was 65 years of age or older. The average household size was 2.69 and the average family size was 3.23.

The Bell County Expo Center is located in Belton and is the venue for many concerts, sporting events, and various ceremonies.

For recreation, Belton has two major lakes: Belton Lake on the Leon River, and Stillhouse Hollow Lake on the Lampasas River. There is also a water park, Summer Fun Water Park.

Belton is home of the Texas Rodeo Cowboy Hall of Fame, housed in the Bell County Expo Center.

All content from Kiddle encyclopedia articles (including the article images and facts) can be freely used under Attribution-ShareAlike license, unless stated otherwise. Cite this article:
Belton, Texas Facts for Kids. Kiddle Encyclopedia.