Temple is a city in Bell County, Texas, United States. As of 2019, the city has a population of 78,439 according to a US census estimate, making it the second largest of Bell County's three principal cities after Killeen.

Located near the county seat of Belton, Temple lies in the region referred to as Central Texas and is a principal city in the Killeen – Temple – Fort Hood metropolitan area, which as of 2015 had a population of 450,051. Located off Interstate 35, Temple is 65 miles (105 km) north of Austin, 34 miles (55 km) south of Waco and 27 miles east of Killeen.

The primary economic drivers are the extensive medical community (mostly due to Baylor Scott & White Medical Center – Temple) and goods distribution based on its central location between the Dallas-Fort Worth, San Antonio, and Houston metropolitan areas, and proximity to larger neighbors Austin and Waco. 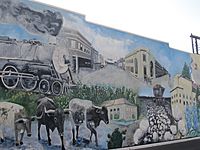 In 1882, the Missouri–Kansas–Texas Railroad built through the town, and soon after, the Santa Fe railroad made Temple a division point. In its early years, Temple was a town of shacks and tents with a large number of saloons and tough characters found in the early West. Locally, it was nicknamed Tanglefoot, because some citizens found that the combination of muddy streets and liquor made walking through the town challenging. After the town was incorporated in 1882, two private schools were founded in the city: the Temple Academy was organized and public school was established in 1884. In 1893, the annual Temple Stag Party began, growing out of a private Thanksgiving celebration attended by the town's leading men. It was held until 1923.

The Temple Railroad and Heritage Museum, on the second floor of the Santa Fe Railroad station at 315 West Avenue B, commemorates the connection between railroads and the city.

Temple is situated within a relatively short drive of most of the major cities of Texas: 124 mi north to Fort Worth, 130 mi north-northeast to Dallas, 65 mi southwest to Austin, 147 mi southwest to San Antonio, and 168 mi southeast to Houston. The city is located right on Interstate 35 running alongside the Balcones Fault with very mixed geography. Towards the east lies the Blackland Prairie region (a rich farming area), and towards the west the terrain rises with low rolling limestone layered hills at the northeastern tip of the Texas Hill Country.

Over 100 years ago, the local economy began with the regional Santa Fe Railroad hospital. Temple now thrives in a complex economy, with both goods distribution and its reputation as a regional medical center leading the way. Baylor Scott & White Health is the largest employer in the area with about 12,000 employees, most located at Baylor Scott & White Medical Center – Temple.

Temple is home to many regional distribution centers and is headquarters to two large, multinational companies, Wilsonart International and McLane Company, as well as parent McLane Group. In addition to some manufacturing, also a developing customer service/ call center industry exists. Temple is also home to the Temple Bottling Company, which produces Dr Pepper (with Imperial Cane sugar).

Temple is within 30 miles (48 km) of Fort Hood, and military personnel contribute a portion of the city's economy.

Temple College offers two-year associate degrees in a variety of subjects, with strong programs in business administration, information technology, and nursing. Temple College was the first college located in Temple, and opened in 1926.

Temple is also home to one of the Texas A&M College of Medicine campuses. It operates in conjunction with the Baylor Scott & White Medical Center – Temple and the Olin Teague Veterans' Hospital Center.

The Hill Country Transit District (The HOP) operates three bus routes within the city, with an additional bus connection to Killeen.

Temple was founded as a railroad junction and serves as a major freight railroad hub to this day. Both the Union Pacific Railroad and BNSF Railway have mainlines serving the city, and a BNSF rail yard and locomotive maintenance facility are located here. Amtrak serves the city with its Texas Eagle passenger train, which stops at the Temple Railway Station.

Temple has general aviation services via Draughon-Miller Central Texas Regional Airport. While commercial airline service is not currently available in the city, Temple is served by these nearby airports:

In 2009, the Texas Department of Transportation (TxDOT) proposed the Texas T-Bone High Speed Rail Corridor that would create a high-speed rail line from Dallas-Fort Worth to San Antonio and another line from Houston that would connect with the first line. While the location for the connection of the two lines had not been officially established, the mayor at the time, Bill Jones III, made an effort to ensure that connection happened in Temple. Temple would be a stop along the line, regardless of where that connection between the two lines would be. The next year in 2010, TxDOT received a federal grant to conduct a study for a line connecting Oklahoma City with San Antonio, and Temple was in the pathway of that line. In 2013, a consultant for the Texas High Speed Rail Corporation stated that the only two connections being considered for the two lines were a connection in Temple and a connection in San Antonio; they expected to make that decision by the end of 2014. The organization also indicated that they plan to have the high-speed rail in operation by 2025. If that connection occurred in Temple, the Killeen – Temple – Fort Hood metropolitan area, with a population of 420,375, would be within about 45 minutes of Dallas, Fort Worth, Houston, and San Antonio. 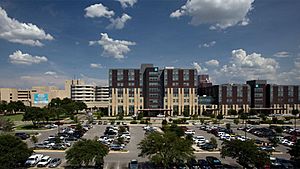 The Texas State Soil and Water Conservation Board has its headquarters in Temple.

Temple is policed by the Temple Police Department and the Bell County Sheriff's Office. The Texas Department of Criminal Justice operates a regional office in the city. The Texas Highway Patrol maintains an office on I-35 in Temple.

The United States Postal Service operates a regional office in the city.

All content from Kiddle encyclopedia articles (including the article images and facts) can be freely used under Attribution-ShareAlike license, unless stated otherwise. Cite this article:
Temple, Texas Facts for Kids. Kiddle Encyclopedia.