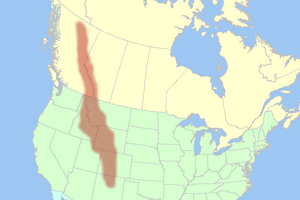 Map highlighting the Rocky Mountains, where the treasure was hidden within the United States.

The Fenn Treasure is a treasure worth over a million dollars was supposedly hidden by art dealer and author Forrest Fenn in the Rocky Mountains.

Fenn has said he is going to go back and get it when the value given by newspapers is inflated to 10 million dollars. When asked why he created the treasure hunt, Fenn said he "just wanted to give people some hope."

Many people have claimed to have found the treasure, but no one has provided any evidence to him supporting their claim. As of July 2017, Fenn has stated "The treasure remains where I hid it about 7 years ago". Many searchers have been within 200 feet (60 m) of the treasure and many within 500 feet (150 m).

Four people are known to have died while searching for the treasure. New Mexico police have tried to pressure Fenn into ending the hunt.

The treasure was found by an unknown person in June 2020.

All content from Kiddle encyclopedia articles (including the article images and facts) can be freely used under Attribution-ShareAlike license, unless stated otherwise. Cite this article:
Fenn treasure Facts for Kids. Kiddle Encyclopedia.