Copperas Cove is a city located in central Texas at the southern corner of Coryell County with smaller portions in Lampasas and Bell Counties. Founded in 1879 as a small ranching and farming community, today the city is the largest in Coryell County, with 32,032 residents as of the 2010 census and an estimated 32,943 residents in 2014. The city's economy is closely linked to nearby Fort Hood, making it part of the Killeen-Temple-Fort Hood Metropolitan Statistical Area. People usually refer to the town as just "Cove".

The first evidence of human habitation in the Five Hills area dates back to at least 4,000 BC. Artifacts, such as skeletal remains, arrowheads, and other stone tools, have been found along local creek beds and valley floors. These first residents were nomadic hunters, traveling in small groups following migrating buffalo herds. When the Spanish came to Texas, a small Plains tribe known as the Tonkawa inhabited the area. The powerful and aggressive Comanche controlled a vast stretch of land to the north and west, making Coryell County a hostile battleground as settlers moved into the area. 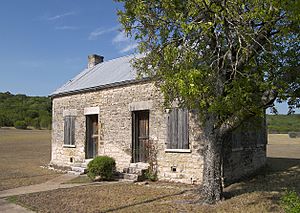 In 1825, Mexico provided Stephen F. Austin with a land grant encompassing a large area including present-day Copperas Cove. Starting in the 1830s, the first white settlers came into the Five Hills region; however, the area lacked stability until after the Civil War. Substantial settlement did not arrive until the development of the cattle industry during the 1870s, when a feeder route of the Chisholm Trail was cut through the region. Settlement centered around a local general store about two miles southwest of present-day downtown. In 1878, residents applied for a post office under the name "Cove", so chosen for the site's sheltered location. However "Cove" was already taken by a nearby community (now called Evant). Inspired by the taste of nearby spring water, residents amended the name to "Copperas Cove" (officially in 1901). The post office was established in March 1879, with Marsden Ogletree as the town's first postmaster. The original building remains today and is the site of the Ogletree Gap Heritage Festival.

Copperas Cove's fortunes were greatly improved when, in 1882, the Gulf, Colorado and Santa Fe Railway expanded into the region. Local resident Jesse M. Clements lobbied to obtain train service and provided the railroad company with the necessary right-of-way about two miles northeast of town. Residents soon moved to a new set of streets laid out by the company's engineer, E.F. Batte. The train depot at Copperas Cove served as the shipping point for farmers and ranchers in the area between Cowhouse Creek and the Lampasas River. Businesses opened to provide services for these area residents, including a steam gristmill-cotton gin, three hotels, a barber shop, and an opera house. Many of the town's early buildings remain to this day, focusing around the block of Avenue D between Main Street and 1st Street. By 1900, the population had reached 475, and residents voted to form their own school district. A private bank opened in 1906, and residents elected Jouett Allin their first mayor in 1913. The town continued to prosper over the coming years, depending largely on local agriculture, of which cotton played a dominant role. Copperas Cove reached a peak population of 600 in 1929, but entered a state of decline with the onset of the Great Depression. During the 1930s, the local bank failed, several businesses closed, and many people left to look for work in other areas. By 1940, only 356 people remained. 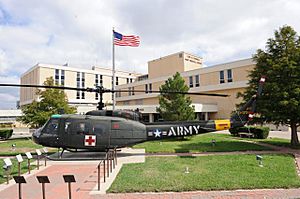 In 1942, Copperas Cove received new life when the US government located Camp Hood next to the struggling community. By the time the cantonment was upgraded to Fort Hood in 1950, the town had over a thousand residents. The population continued to increase rapidly, reaching almost 5,000 in 1960 and more than doubling each of the next two decades, eventually coming to the present count of 32,032 at the 2010 census. During this period, the city limits greatly expanded, encompassing acres of newly built tract housing with upgraded roads and services. The establishment of the fort drastically altered the character of the city. Soldiers from across the country bring their families and settle in Copperas Cove, often remaining after concluding their military service. In addition to diversifying the ethnic and religious composition of the city, Fort Hood altered the local economy. Since much of the area farmland was acquired by the federal government, businesses within Copperas Cove now largely provide services for Fort Hood soldiers and their families.

On Memorial Day, 25 May 2015, an EF1 tornado touched down just west of the town, during the 2015 Texas–Oklahoma flood and tornado outbreak. Fortunately, the tornado shifted to the northeast before reaching Cove. However, that same tornado hit Pidcoke, a small community just north of Cove. 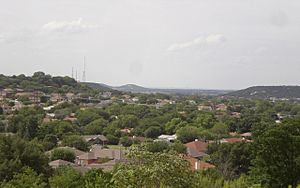 Copperas Cove is located in the Lampasas Cut Plains of central Texas, within an agglomeration of hills situated between the Lampasas River and Cowhouse Creek valleys, known as the "Five Hills" area. Copperas Cove's climate is humid subtropical with hot summers, cool winters, and rainy springs. The average high in August is 96 °F (36 °C), and the average low in January is 34 °F (1 °C). May is the rainiest month. The city lies within Tornado Alley, and twisters have been known to touch down in the area. Rainfall averages 33 inches (840 mm) per year, making the land suitable for agriculture without irrigation, though the region is prone to drought.

The area's thin layer of topsoil tends to be a light, crumbly caliche—capable of sustaining many agricultural plants, but susceptible to depletion and erosion. Before ranchers and farmers began altering the landscape, the area was once part of a vast grassland. Bison, deer, and pronghorn grazed on tall native grasses. However, because of overgrazing, land clearing, and the suppression of wildfires, these native grasses have been mostly replaced by invasive weeds and tough, woody trees, including Texas live oak, Texas red oak, red juniper (red cedar), and mesquite.

Copperas Cove has a suburban cityscape typical among American small towns developed in the post-World War II era. The majority of commercial activity occurs along the main thoroughfare, US Highway 190. Since most of Copperas Cove has been built after 1950, the extent of the town's walkable, historic downtown is considerably smaller than nearby, less-populated communities, such as Lampasas or Gatesville. Most residential neighborhoods are low-density, single-family homes. Because of changing economic conditions in recent decades, intensive farming and ranching has largely left the area, making land fairly cheap to develop. After a brief slowdown of development during the 1980s, new subdivisions resumed expansion into the surrounding countryside.

Public transportation is provided within the city by HOP, whose buses can be recognized by their teal and purple color. The region is served by the Killeen–Fort Hood Regional Airport (GRK) located a few miles outside of town.

Rabbit Fest is a four-day arts and crafts festival held on the third weekend of May each year. Festivities include a carnival, midway, parade, chili cook-off, and many other activities.

The Ogletree Gap Heritage Festival is held at the city's original town site, the Ogletree Gap Stagecoach and Post Office. It occurs annually on the third weekend of October. Food, arts and crafts, Civil War reenactments, a petting zoo, pony rides, and kids games are available.

The Krist Kindl Markt is held on the first weekend of December in downtown Copperas Cove. It is a German-inspired open air Christmas market sponsored by the Downtown Association. It typically hosts live music and performances by local groups. There is also a night-time Christmas parade.

The C.H.A.M.P.S. Heart of Texas Bowl is hosted by Copperas Cove at Bulldawg Stadium. The first HOT Bowl was held in 2001.

All content from Kiddle encyclopedia articles (including the article images and facts) can be freely used under Attribution-ShareAlike license, unless stated otherwise. Cite this article:
Copperas Cove, Texas Facts for Kids. Kiddle Encyclopedia.