Gatesville is a city in and the county seat of Coryell County, Texas, United States. The population was 15,751 at the 2010 census. The city has five of the eight prisons and state jails for women operated by the Texas Department of Criminal Justice. One of the facilities, the Mountain View Unit, has the state's death row for women.

Gatesville is part of the Killeen–Temple–Fort Hood Metropolitan Statistical Area.

The city is 30 miles (48 km) from Waco. It is midway between Austin and Fort Worth.

Gatesville was established in 1854 on land donated by Richard G. Grant (1808–1858), shortly after the organization of Coryell County. The name was taken from Fort Gates, which had been established in 1849 five miles west.

Since 2000 the Prison Boss Cookoff, a barbecue competition that serves as a fundraiser for the Correctional Peace Officers Foundation, has been held every year. Orwig described it as "a family gathering of prison workers." 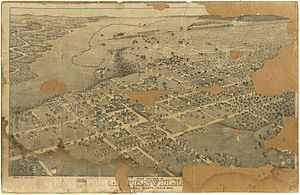 Donated in 1991, the Coryell County Museum in Gatesville is home to the Loyd and Madge Mitchell Collection of about 10,000 pairs of spurs, thought to be the largest such collection in the world. In 2001, the 77th Texas Legislature designated Gatesville the "Spur Capital of the Texas".

All content from Kiddle encyclopedia articles (including the article images and facts) can be freely used under Attribution-ShareAlike license, unless stated otherwise. Cite this article:
Gatesville, Texas Facts for Kids. Kiddle Encyclopedia.