For the Alabama politicians, see George Goldthwaite and Alfred Goldthwaite.

Goldthwaite (established 1885) is a small city located in Mills County in Central Texas. The population was 1,878 at the 2010 census. It is the county seat of Mills County, which is named for John T. Mills, a justice of the Supreme Court for the Third, Seventh, and Eighth districts of the former Republic of Texas. Goldthwaite is located in the western portion of the Texas Hill Country. The elevation is 1,580 feet. Goldthwaite is situated at the intersections of U.S. Highways 84 and 183, Texas State Highway 16, and Texas Farm-to-Market Roads 572 and 574.

Goldthwaite was originally a part of the southern portion of Brown County. Like many other Texas communities, Goldthwaite was named for a railroad official, Joe C. Goldthwaite of the Gulf, Colorado and Santa Fe Railway, who conducted the auction of town lots. The post office opened in 1886. After Mills County was organized, several landowners donated property with the assurance that Goldthwaite would become the county seat. The first county jail was built in 1888, and the courthouse was completed in 1890.

The Santa Fe Railroad constructed shops and a roundhouse switch. Goldthwaite was scheduled to have become a division point until labor problems compelled the railroad to relocate the shops to Brownwood, the seat of Brown County, to the north. Even without the railroad, Goldthwaite progressed. By 1898, it had a population of 1,200, three churches, a bank, a number of hotels and boardinghouses, two cotton gins, two gristmills, both public and private schools businesses, and two competing weekly newspapers, the Goldthwaite Eagle and the Goldthwaite Mountaineer. A meeting in 1905 of the Confederate Reunion, a major annual social event, remains the largest public gathering in the history of Mills County. A large Confederate monument is on the front lawn of the courthouse in Goldthwaite.

A fire in 1912 destroyed the wooden courthouse, and it was replaced in 1913 by a brick structure designed in classical revival style by the architect Henry T. Phelps. The courthouse is shaded by several large trees. 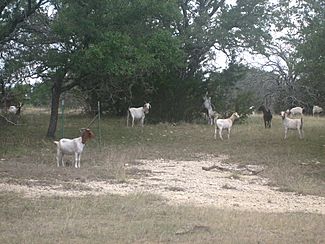 Goldthwaite is a trade center for farm equipment and such agricultural products as mohair, wool, fruits, cattle, turkeys, and pecans. Herds of mohair-producing Angora goats are raised in the general area about Goldthwaite. In the fall and winter, the area is popular with hunters seeking white-tailed deer. The city lies on United States Highway 183, a segment of the Ports-to-Plains Highway which connects the Texas heartland with the Texas Gulf Coast. Goldthwaite City Park, at the intersection of U.S. Highway 183 and Texas Highway 16, offers swimming, picnicking, and playground equipment. The nine-hole municipal golf course is open year-round. Goldthwaite has two museums: Mills County Museum, which contains replicas of pioneer rooms and hosts a chili supper in mid-November, and the Old Jail Museum at Courthouse Square, which is included in the National Register of Historic Places.

Goldthwaite is known for its Christmas celebration from November through December. Lighting displays are erected and holiday fare fills the specialty shops. Goldthwaite holds an annual "Parade of Lights" on the first Saturday in December.

Around 20 miles west of Goldthwaite is the Regency Suspension Bridge atop the Colorado River of Texas, which divides Mills County from San Saba County. Regency is one of the few swinging bridges still in use in Texas. It is featured on Bob Phillips's weekly syndicated television series Texas Country Reporter. The bridge is reached by a gravel road some eight miles from Texas Farm-to-Market Road 574.

Mills County and Goldthwaite were somewhat more Democratic in political orientation than the state of Texas as a whole, at least until 1996. Mills County voters supported Democratic presidential nominees Lyndon B. Johnson in 1964, Hubert H. Humphrey in 1968, Jimmy Carter in 1976 and 1980, and Bill Clinton in 1992. Voters supported Republican candidates Richard Nixon in 1972, Ronald Reagan in 1984, George H.W. Bush in 1988, Bob Dole in 1996, and George W. Bush in 2000 and 2004. Dole received 1,057 votes to Bill Clinton's 752 and 200 for Independent Ross Perot, the Dallas billionaire industrialist. The second Bush polled large majorities over Democrats Al Gore, and John Kerry.

In the 2008 presidential primaries, Mills County cast 772 ballots in the Democratic contest and 487 in the GOP race. In the United States Senate primary, the county cast 555 Democratic ballots and 408 Republican votes.

According to the United States Census Bureau, the city has a total area of 1.7 square miles (4.4 km2), all of it land.

There were 740 households of which 29.1% had children under the age of 18 living with them, 48.8% were married couples living together, 11.6% had a female householder with no husband present, and 37.0% were non-families. 35.3% of all households were made up of individuals and 23.4% had someone living alone who was 65 years of age or older. The average household size was 2.23 and the average family size was 2.87.

The climate in this area is characterized by hot, humid summers and generally mild to cool winters. According to the Köppen climate classification system, Goldthwaite has a humid subtropical climate, Cfa on climate maps.

All content from Kiddle encyclopedia articles (including the article images and facts) can be freely used under Attribution-ShareAlike license, unless stated otherwise. Cite this article:
Goldthwaite, Texas Facts for Kids. Kiddle Encyclopedia.