Holland is a city in Bell County, Texas, United States. The population was 1,121 at the 2010 census. The center of population of Texas is located in Holland. It is part of the Killeen–Temple–Fort Hood Metropolitan Statistical Area.

Holland has a history that reaches back years beyond the actual founding of the town, to a time before the Civil War when a community known as Mountain Home began to grow up near Gotcher's Mountain, a hill south of town. A post office was established on August 22, 1870, under the name Mountain Home with James Shaw as postmaster. On November 6, 1871, the Mountain Home post office was officially closed.

In 1881, an extension of the Missouri–Kansas–Texas Railroad was laid out from Denison to Taylor, and the tracks were constructed through Bell County in 1881 and 1882, from north to south, passing through the Holland community. This was to bring about the town of Holland as it is known today.

James Reuben Holland was born in 1847 in Claiborne County, Tennessee. Holland arrived in Belton, Texas, on October 26, 1874, with a wagon and horses, his wife and four children and six dollars cash.

A. Moss made an application for the Mountain Home community to have a new post office again, but by that time the name "Mountain Home" had already been claimed by another community. Without Holland's knowledge, Moss submitted the name "Holland". The Holland post office was officially approved April 10, 1879, with the appointment of Alfred Evans as postmaster.

Holland married a young widow in 1867. The widow, Mary Tabitha Hutchens Moore, had one daughter, Macie, from her first marriage. Together Holland and Mary had five children: Ellis, Alice, Claude, Mary and another child that did not live. In 1877, Holland bought 105 acres (42 ha) of land along Darr's Creek for $5.00 an acre. The following year, Holland bought an additional 145 acres (59 ha) and built a steam-powered cotton gin.

Holland is home to the Corn Festival. The "Corn Fest", as the locals call it, is held every third Saturday in June. It traditionally includes a parade on Saturday, carnival from that Wednesday until Saturday, and live music and street dances on Friday and Saturday nights.

The Holland High School Leadership class is working on a community center. 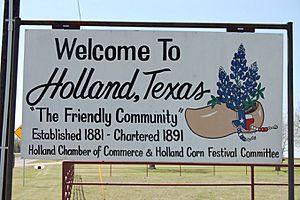 Holland is served by the Holland Independent School District.

All content from Kiddle encyclopedia articles (including the article images and facts) can be freely used under Attribution-ShareAlike license, unless stated otherwise. Cite this article:
Holland, Texas Facts for Kids. Kiddle Encyclopedia.