Kids Encyclopedia Facts
Not to be confused with Taylor County, Texas. 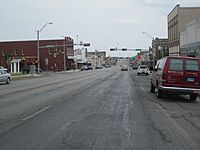 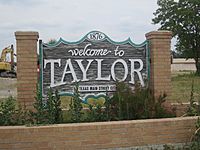 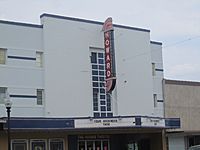 Howard Theatre, owned by Georgetown attorney William Bryan Farney and his wife, Marsha Farney, the District 20 member of the Texas House of Representatives from Williamson County

In 1876 the Texas Land Company auctioned lots in anticipation of the arrival of the International-Great Northern Railroad when Taylor was founded that year. The city was named after Edward Moses Taylor, a railroad official, under the name Taylorsville which officially became Taylor in 1892. Immigrants from Moravia and Bohemia (now the Czech Republic) and other Slavic states, as well as from Germany and Austria, helped establish the town. It soon became a busy shipping point for cattle, grain, and cotton.

By 1878 the town had 1,000 residents and thirty-two businesses, twenty-nine of which were destroyed by fire in 1879. Recovery was rapid, however, and more substantial buildings were constructed. In 1882 the Taylor, Bastrop and Houston Railway (later part of the Missouri-Kansas-Texas Railroad) reached the community, and machine shops and a roundhouse serviced both rail lines. In 1882 the town was incorporated with a mayor-council form of city government, and in 1883 a public school system replaced a number of private schools.

By 1890 Taylor had two banks and the first savings and loan institution in Texas. An electric company, a cotton compress, and several newspapers were among the new enterprises. A water line from the San Gabriel River, a 100-man volunteer fire department, imported and local entertainment, and an annual fair made noteworthy news items by 1900.

The climate in this area is characterized by hot, humid summers and generally mild to cool winters. According to the Köppen Climate Classification system, Taylor has a humid subtropical climate, abbreviated "Cfa" on climate maps.

All content from Kiddle encyclopedia articles (including the article images and facts) can be freely used under Attribution-ShareAlike license, unless stated otherwise. Cite this article:
Taylor, Texas Facts for Kids. Kiddle Encyclopedia.