Hutto is a city in Williamson County, Texas, United States. It is part of the Austin–Round Rock metropolitan area. The population was 27,577 at the 2020 census.

According to the United States Census Bureau, the city has a total area of 7.75 square miles (20.1 km2), all of it land.

Historically, Hutto was not established until 1876 when the International-Great Northern Railroad passed through land owned by James Emory Hutto (1824-1914), for whom the community is named. Railroad officials designated the stop Hutto Station. James Hutto was born in Alabama on June 8, 1824; he came to Texas in 1847 and moved his family to Williamson County in 1855. A slave, Adam Orgain, was actually the first person to live in the immediate Hutto vicinity having been placed out on the black land prairie by his owner to watch after the cattle and livestock holdings. It was in 1876 that James Hutto sold 50 acres (200,000 m2) to the Texas Land Company of New York for a town site and railroad right of way. Hutto had become a wealthy cattleman in Williamson County; however, in 1885 he left Hutto and moved to Waco and entered the hardware business. Other early settlers in the area were the Carpenter, Davis, Evans, Farley, Goodwin, Highsmith, Johnson, Magle, Payne, Saul, Weight, Womack and Wright families. Other people living in Hutto during the 1890s included the Armstrongs, the Ahlbergs, M.B. Kennedy, the Hugh Kimbro family, William McCutcheon, Green Randolph, J.B. Ross and the Tisdales. Soon a great many more people, primarily Swedish and German immigrants, came to this area to farm and ranch and begin their new lives in America. 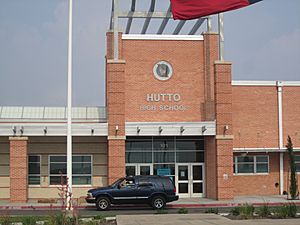 Hutto is served by the Hutto Independent School District.

All content from Kiddle encyclopedia articles (including the article images and facts) can be freely used under Attribution-ShareAlike license, unless stated otherwise. Cite this article:
Hutto, Texas Facts for Kids. Kiddle Encyclopedia.