Kids Encyclopedia Facts
Not to be confused with Tyler County, Texas.

Tyler has the nickname "Rose Capital of the World". It gained this name due to the large quantity of roses processed through the area, along with hosting America's largest rose garden.

In 1985, the international Adopt-a-Highway movement originated in Tyler when, after appeals by local Texas Department of Transportation officials, the local Civitan chapter adopted a two-mile (3-km) stretch of U.S. Highway 69. Tyler is also home to the Caldwell Zoo and Broadway Square Mall.

As a regional educational and technology center, Tyler is the host for more than 20,000 higher education students, a College of Engineering, and a University Health Science Center, two regional, billion-dollar hospital systems, and a variety of technology startups. 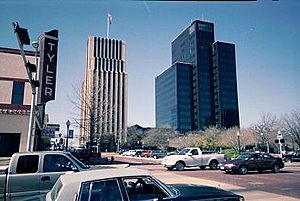 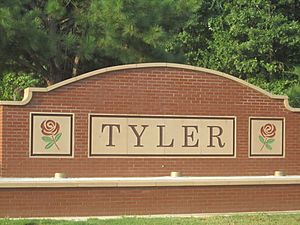 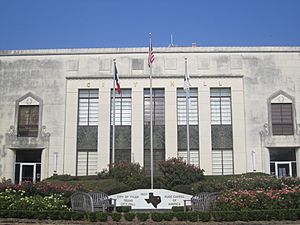 Annually, the Texas Rose Festival draws thousands of tourists to Tyler. The festival, which celebrates the role of the rose-growing industry in the local economy, is held in October and features a parade, the coronation of the Rose Queen, and other civic events. The Rose Museum features the history of the Festival. Tyler is home to Caldwell Zoo, several local museums, Lake Palestine, Lake Tyler, and numerous golf courses and country clubs. A few miles away in Flint, TX is The WaterPark @ The Villages, a year-round, indoor water park. There is also an "Azalea Trail" in Tyler, which are two officially designated routes within the city that showcase homes or other landscaped venues adorned with azalea shrubs. The Azalea Trail also is home to the long-standing tradition of the Azalea Belles. The official greeters of the Azalea Trail are known as the Azalea Belles, young women from the Tyler area who dress in antebellum gowns. The belles are chosen each year from area high schools or home school families, and it is an honor to be chosen. Tyler State Park, a few miles North of Town is where visitors can camp, canoe, and paddle boat on the lake. Other activities include picnicking, camping, boating (motors allowed – 5 mph speed limit), boat rentals, fishing, birding, hiking, mountain biking, hiking trails, lake swimming (in unsupervised swimming area), and nature study. The Smith County Historical Society operates a museum and archives in the old Carnegie Library. The East Texas State Fair is held annually in Tyler. Lake Tyler was the location of the HGTV Dream Home contest in 2005. The 6,500 square feet (600 m²) house briefly boosted tourism and interest in the community. It subsequently was sold at public auction in January, 2008, for 1.325 million dollars. 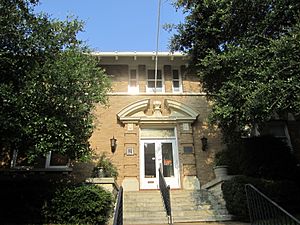 The Smith County Historical Society building is located across the street from the Tyler Public Library.

Tyler has a Cotton Belt Railroad Depot Museum located near the Chamber of Commerce office.

The Smith County Historical Society, a 501(c)(3) non-profit organization, was founded in 1959 by individuals and business firms dedicated to discovering, collecting, and preserving data, records, and other items relating to the history of Smith County, Texas. The Society operates a museum and archives, which is located in the former Carnegie Public Library building in downtown Tyler. Permanent museum exhibits include life-size dioramas with Smith County history topics ranging from Caddo Indians to the 20th century. Other items from the society's collections are showcased in revolving, temporary exhibits. The society's archival library contains historical artifacts of Smith County, including newspapers, city directories, school records, photographs, maps, historical papers, rare books, and much more. The archives are open to the public for research on a limited schedule with volunteer staff on duty. The society is also the official caretaker of Camp Ford Historic Park.

Camp Ford was the largest Confederate Prisoner of War camp west of the Mississippi River during the American Civil War. The original site of the camp stockade is a public historic park managed by the Smith County Historical Society. The park contains a kiosk, paved trail, interpretive signage, a cabin reconstruction, and a picnic area. It is located on Highway 271, 0.8 miles (1.3 km) north of Loop 323. 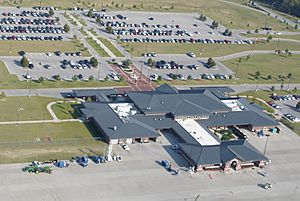 The most common form of transportation is the motor vehicle. Tyler is a nexus of several major highways. Interstate 20 runs along the north edge of the city going east and west, U.S. Highway 69 runs north–south through the center of town and State Highway 64 runs east–west through the city. Tyler also has access to U.S. Highway 271, State Highway 31, State Highway 155, and State Highway 110. Loop 323 was established in 1957 and encircles the city, which has continued to grow outside of this loop. Loop 49 is a limited access "outer loop" around the city and currently runs from State Highway 110 south of Tyler to Interstate 20 northwest of Tyler. Future segments of this tollway will extend Loop 49 out to Interstate 20 on the eastern side of the city and to other East Texas destinations.

Tyler Transit provides customers with public transportation service within the City of Tyler. The buses run daily, excluding Sundays and holidays. Tyler Transit offers customers the option to purchase tickets, tokens, or passes at the Tyler Transit office, located at 210 E. Oakwood Street inside the Cotton Belt Railroad Depot at the main transfer point. The City of Tyler paratransit service is a shared-ride, public transportation service. Requests for service must be made the day before the service is needed. Trips can be scheduled up to 14 days in advance. ADA complimentary paratransit service is provided to all origins and destinations within the service area defined as the city limits of Tyler. Greyhound Lines bus service is available through a downtown terminal.

Tyler was the hub for a series of short-line railroads which later evolved into the St. Louis Southwestern Railway, better known as "The Cotton Belt Route". This line later became part of the Southern Pacific Railroad, which itself merged with the Union Pacific Railroad, which continues to serve the city today. No passenger train service to Tyler has occurred since April 1956, but Amtrak runs through the city of Mineola, a short distance north of Tyler.

A 2014 study by Walk Score ranked Tyler with a walkability score of 32 (out of 100) with some amenities within walking distance.

Tyler is the home of many churches, including five large congregations in downtown, the Marvin United Methodist Church, Dayspring United Methodist Church, West Erwin Church of Christ, First Baptist Church, and the Cathedral of the Immaculate Conception. Tyler is also the seat of Catholic Diocese of Tyler, which is particularly noteworthy for its St. Joseph the Worker Parish, one of the few churches in America dedicated to the exclusive use of the Traditional Latin Mass. The parish is staffed by the Priestly Fraternity of St. Peter. The city also is the home of the Cathedral of the Immaculate Conception and the Sanctuary of Our Lady of Mount Carmel, a 100 plus year sanctuary recently renovated and declared a historic and heritage site by the Catholic Diocese of Tyler. The Saint Peter Claver Parish located in central Tyler, is the second largest Catholic Church in Tyler and was dedicated to St. Peter Claver, a Franciscan Priest that assisted the black slaves in Brasil during the slave trade to South America. There is also a Nazarene church on Old Bullard Rd called Tyler First Church Of The Nazarene.

Tyler has three United Pentecostal Churches the largest of them is Tyler Tabernacle located just outside of Loop 323. The Our Lady of Guadalupe Catholic church in East Tyler is also a major center of gathering. The St Peter and Paul Chapel, a Catholic church, is located next to the Bishop Thomas K. Gorman Regional Catholic School was constructed and dedicated in 2011 and holds masses in English and Spanish with a significant number of other services offered to all Tyler and neighboring residents. The city's largest church, Green Acres Baptist Church, is located on Troup Highway in southeast Tyler. Tyler is also home to two reformed Baptist churches, Sylvania Church and Living Acts Church, both of which are located in the south Tyler area. Additionally, Tyler has two Jewish houses of prayer, Ahavath Achim, which associates itself with Conservative Judaism and Beth El which adheres to Reform Judaism. Tyler is also home to East Texas Islamic Society, established in 1988, which includes an Islamic house of worship and an Islamic school for children. There is also a Unitarian, Universalist Fellowship on Old Omen Road and Cross Brand Cowboy Church at 11915 FM-2015 Tyler, Texas.

All content from Kiddle encyclopedia articles (including the article images and facts) can be freely used under Attribution-ShareAlike license, unless stated otherwise. Cite this article:
Tyler, Texas Facts for Kids. Kiddle Encyclopedia.