Smith County is located in the U.S. state of Texas. As of the 2010 census, its population was 209,714. Its county seat is Tyler. Smith County is named for James Smith, a general during the Texas Revolution. 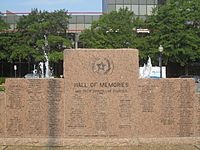 Smith County veterans display, the Wall of Memories, in the Tyler plaza 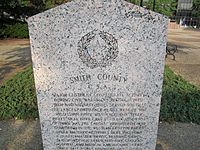 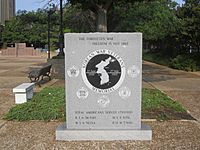 The first known inhabitants of the area now known as Smith County were the Caddo Indians. In July 1846 Smith County separated from the Nacogdoches District and was named for James Smith, a General of the Texas Revolution. It was at this time that Tyler was designated as the county seat.

Camp Ford was the largest Confederate Prisoner of War Camp west of the Mississippi River during the American Civil War and was where Sheriff Jim Reed of Collin County and Judge McReynolds, former chief justice of the district, were seized and lynched by "Regulators." The original site of the Camp stockade is now a public historic park, owned by Smith County, Texas, and managed by the Smith County Historical Society. The park contains a kiosk, paved trail, interpretive signage, a cabin reconstruction, and a picnic area. It is located on Highway 271, 0.8 miles north of Loop 323.

There were 76,427 households, out of which 34.8% had children under the age of 18 living with them, 51.8% were married couples living together, 13.3% had a female householder with no husband present, and 30.7% were non-families. 25.3% of all households were made up of a householder living alone. The average household size was 2.60 and the average family size was 3.13.

All content from Kiddle encyclopedia articles (including the article images and facts) can be freely used under Attribution-ShareAlike license, unless stated otherwise. Cite this article:
Smith County, Texas Facts for Kids. Kiddle Encyclopedia.