Cherokee County is a county located in the U.S. state of Texas. As of the 2010 census, its population was 50,845. The county seat is Rusk. The county was named for the Cherokee, who lived in the area before being expelled in 1839. Rusk, the county seat, is 130 miles southeast of Dallas and 160 miles north of Houston. 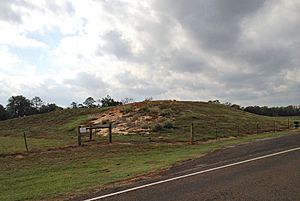 The Hasinai group of the Caddo tribe built a village in the area about AD 800. and continued to live in the area until the 1830s, when they migrated to the Brazos River. The Federal government moved them to the Brazos Indian Reservation in 1855 and later to Oklahoma.

The Cherokee, Delaware, Shawnee, and Kickapoo Native American people began settling in the area circa 1820. The Texas Cherokee tried unsuccessfully to gain a grant to their own land from the Mexican government.

Sam Houston, adopted son of Chief Oolooteka (John Jolly) of the Cherokee, negotiated the January 14, 1836, treaty between Chief Bowl of the Cherokee and the Republic of Texas. On December 16, 1837, the Texas Senate declared the treaty null and void, and encroachment of Cherokee lands continued. On October 5, 1838, Indians massacred members of the Isaac Killough family at their farm northwest of the site of present Jacksonville, leading to the Cherokee War of 1839 and the expulsion of all Indians from the land which was to become the county of Cherokee.

Domingo Terán de los Ríos and Father Damián Massanet explored the area on behalf of Spain in 1691. Louis Juchereau de St. Denis began trading with the Hasinais in 1705. Nuestro Padre San Francisco de los Tejas Mission was originally established in 1690 but was re-established in 1716 by Captain Domingo Ramon. It was abandoned again because of French incursions and re-established in 1721 by the Marques de San Miguel de Aguyao.

In 1826, empresario David G. Burnet received a grant from the Coahuila y Tejas legislature to settle 300 families. then. The settlers were mostly from the southern states and brought with that lifestyle with them. By contracting how many families each grantee could settle, the government sought to have some control over colonization. 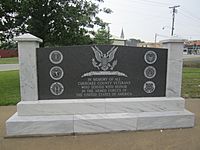 Cherokee County was formed from land given by Nacogdoches County in 1846. It was organized the same year. The town of Rusk became the county seat.

Cherokee County voted in favor of secession from the Union, during the build-up to the Civil War.

In 1872, the International – Great Northern Railroad caused Jacksonville to relocate two miles east, to be near the tracks. The Kansas and Gulf Short Line Railway was built north-to-south through the county between 1882 and 1885. The Texas and New Orleans Railroad in 1905, and the Texas State Railroad in 1910, each gave rise to new county towns along their tracks.

All content from Kiddle encyclopedia articles (including the article images and facts) can be freely used under Attribution-ShareAlike license, unless stated otherwise. Cite this article:
Cherokee County, Texas Facts for Kids. Kiddle Encyclopedia.