Kids Encyclopedia Facts
Not to be confused with Houston, Texas. 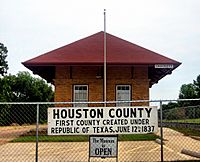 The Houston County Museum is located in a restored railroad depot south of Crockett. 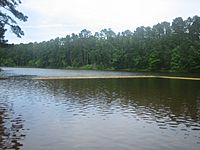 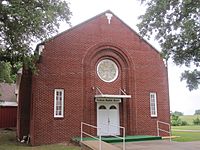 Houston County is a county located in the U.S. state of Texas. As of the 2010 census, the population was 23,732. Its county seat is Crockett. The county is named for Sam Houston, a president of the Republic of Texas and Governor of Texas. Houston County was one of forty-six prohibition or entirely dry counties in the state of Texas, until voters in a November 2007 special election legalized the sale of alcohol in the county.

Houston County bears no relationship, save its namesake, with the City of Houston, which is located approximately 100 miles (160 km) to the south, in Harris County.

A county historical museum is located in a former railroad depot, located on First Street in Crockett.

Samuel Cartmill Hiroms (1836–1920) was born in present-day Polk County, his parents having been among Stephen F. Austin's "Old 300" families. Hiroms was an educator and a surveyor who served in the Confederate Army. He and his second wife, the former Emily Ann Johnston (1853–1948), settled in the Creek Community of Houston County. Their homestead was adjacent to what is now the Austonio Baptist Church on State Highway 21 in Austonio, Texas.

Collin Aldrich (1801–1842) was a veteran of the Battle of San Jacinto and was the first judge in Houston County, having served during the Republic of Texas from 1837-1841.

Eli Coltharp established his Coltharp Hill in Houston County near Kennard. The store, post office, gristmill, cotton gin, blacksmith shop, and millinery shop were located on the stagecoach route west of Nacogcoches in Houston County. When the railroad bypassed the Contharp Community, many of the residents relocated to work at a nearby sawmill.

James Murphy Hager of Kentucky and his wife, the former Nacoma Clark, established the Hagerville Community in the 1840s. Hager was a farmer, cabinet maker, and blacksmith. The stagecoach from Nacogdoches to Navasota, ran beside the Hagers' log home. One of the Hager sons donated land for a church and a school. There was a post office at Hagerville from 1891-1905.

The Four C Mill operated in Houston County during the first two decades of the 20th century. R.M. Keith, agent of the Central Coal and Coke Company in Kansas City, Missouri, began buying virgin timber in the fall of 1899. Lumber to construct the new mill was cut by a small sawmill purchased in early 1901 from J.H. Ratcliff. Keith organized the Louisiana and Texas Lumber Company to operate the Four C. The mill was producing a staggering 300,000 board feet of lumber per daily by June 1902. Ratcliff Lake, now a United States Department of Interior recreational site, was the millpond for the Four C. The Texas Southeastern Railroad laid track from Lufkin to haul out the lumber. The town of Ratcliff was separated from the Four C by a fence, built to discourage the mill workers from spending their money outside the company town. The 120,000 acres were in time exhausted, and by 1920, the mill shut down.

Houston County is served by US Highway 287 and State Highways 7, 19 and 21. All of these highways intersect at the Courthouse Square in downtown Crockett. SH 21 follows the 300-year-old route of the El Camino Real de los Tejas National Historic Trail.

Freight rail service is provided by Union Pacific Railroad. The Crockett Depot, built in 1909, has been restored and now serves as the Houston County Museum.

Demand and Response public transportation within Houston County is provided by Brazos Transit District. Persons needing transportation should call 1-800-272-0039 to schedule a ride. Greyhound Bus Company also provides service to the cities of Crockett and Grapeland.

All content from Kiddle encyclopedia articles (including the article images and facts) can be freely used under Attribution-ShareAlike license, unless stated otherwise. Cite this article:
Houston County, Texas Facts for Kids. Kiddle Encyclopedia.