Kids Encyclopedia Facts
Not to be confused with Crockett County, Texas.

Crockett is a city in Houston County, Texas, United States. As of the 2010 census, the city population was 6,950. It is the fifth oldest city and the county seat of Houston County, the oldest county in Texas. 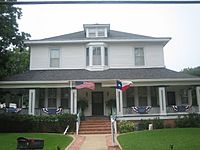 The town was named after David Crockett who reportedly had camped nearby on his way to the Alamo; the site was very near the Old San Antonio Road. A family from Tennessee donated the land for the town and named it after Crockett, whom they had previously known. The town was incorporated in 1837, and a post office was granted the following year. Crockett was connected to Nacogdoches by stage service. In 1839 raids by the Alabama-Coushatta and Cherokee Indians forced the town's residents to take shelter in the fortified log courthouse. Crockett was a training center for Confederate conscripts during the Civil War. The railroad came through in 1872 enabling Crockett to exploit the county's timber resources. By 1885 the town was thriving with a population of 1,200 and the following year a school was opened for black girls. It evolved into Mary Allen Junior College, which operated into the 1970s. In 1904 lignite mining started and it peaked about 1910. The stands of timber were seriously depleted by the 1920s. The population was over 3,000 in the mid-1920s and by 1936, it was nearly 4,500. The population of Crockett increased while most of East Texas declined after World War II. It reached 5,000 by the 1960 census.

During this time, one of the first loop roads in the nation (Loop 304) was built around the city. This traffic reliever was procured through the works of heavyweight politicians who called Crockett home. Blues singer Lightnin' Hopkins was once arrested in Crockett, Texas. In recent years, the economy of Crockett has expanded with the construction of new retail space on Loop 304. Several historic buildings in downtown have been renovated to accommodate new office and service space. Renewed interest in reserves of natural gas in the surrounding area has led to construction of energy infrastructure and receipt of royalty revenues for land.

In 1854, A.T. Monroe, a grandnephew of U.S. President James Monroe came to Crockett from Virginia. He established what is now the Monroe-Crook House built with brick placed between the inner and outer walls. George W. Crook purchased the residence in 1911. The house, open for public tours, is located in front of the John H. Wooters Public Library in the same block as the Crockett Presbyterian Church. The Presbyterian Church was established in 1854. The building was razed by a fire in 1926 and rebuilt. 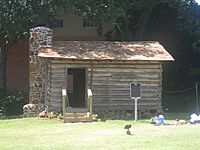 The historic Strode-Pritchett Cabin was located to Crockett for the 1976 bicentennial. At the site is a painting of Davy Crockett by the artist Lucas Short.

According to the United States Census Bureau, the city has a total area of 8.9 square miles (23 km2), all land.

The terrain of the town is hilly, and (as with many East Texas towns) contains significant forest, mostly loblolly pine and pecan trees.

There were 2,672 households out of which 31.1% had children under the age of 18 living with them, 38.5% were married couples living together, 23.3% had a female householder with no husband present, and 34.6% were non-families. 31.3% of all households were made up of individuals and 16.7% had someone living alone who was 65 years of age or older. The average household size was 2.46 and the average family size was 3.08.

The climate in this area is characterized by hot, humid summers and generally mild to cool winters. According to the Köppen Climate Classification system, Crockett has a humid subtropical climate, abbreviated "Cfa" on climate maps.

All content from Kiddle encyclopedia articles (including the article images and facts) can be freely used under Attribution-ShareAlike license, unless stated otherwise. Cite this article:
Crockett, Texas Facts for Kids. Kiddle Encyclopedia.