Kids Encyclopedia Facts
Not to be confused with Centerville, Trinity County, Texas or Centreville, Texas. 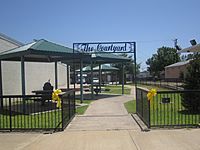 "The Courtyard" across from the Leon County Courthouse in Centerville 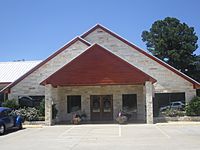 Centerville is a city in Leon County, in the U.S. state of Texas. The population was 892 at the 2010 census. It is the county seat of Leon County.

Centerville was so named as it is near the geographic center of Leon County. However, it is also coincidentally located nearly midway between Dallas and Houston.

Centerville became the county seat of Leon County in 1850. It was originally built on 200 acres donated by Robert J Townes and D.C. Carrington.

The town established an annual Black-Eyed Pea Festival in 1937.

According to the United States Census Bureau, Centerville has a total area of 1.5 square miles (3.9 km2), all of it land.

There were 388 households out of which 25.3% had children under the age of 18 living with them, 46.4% were married couples living together, 10.3% had a female householder with no husband present, and 40.5% were non-families. 38.1% of all households were made up of individuals and 22.9% had someone living alone who was 65 years of age or older. The average household size was 2.17 and the average family size was 2.89.

Centerville is home to several churches representing the main denominations of the Christian faith, in addition to several non-denominational congregations.

The climate in this area is characterized by hot, humid summers and generally mild to cool winters. According to the Köppen Climate Classification system, Centerville has a humid subtropical climate, abbreviated "Cfa" on climate maps.

All content from Kiddle encyclopedia articles (including the article images and facts) can be freely used under Attribution-ShareAlike license, unless stated otherwise. Cite this article:
Centerville, Texas Facts for Kids. Kiddle Encyclopedia.