Lovelady is a city in Houston County, Texas, United States. The population was 608 at the 2000 census.

Lovelady was founded by investors of the Houston & Great Northern Railroad as a railway line was built through a land grant of Cyrus Lovelady, near the communities of Nevil's Prairie, Pennington, and Weldon. The U.S. Post Office opened on Nov. 8, 1872. The town soon had livery, stables, blacksmith shop, and hotels, prospering as both a marketplace and a shipping point. By 1876 a public school was held in a local log house. Lovelady was incorporated in 1927.

The Porter Place Ranch at Lovelady, founded in 1912 by V. H. "Hoyt" Porter, is the setting of many prized photographs by Porter's son-in-law, Guy Gillette, who spent many summers at the ranch with his wife, Doris Porter Gillette, and their two sons. In 2013, Andy Wilkinson of Lubbock, Texas, published through the University of Oklahoma Press a coffee-table book, A Family of the Land: The Texas Photography of Guy Gillette, a photo-account of Gillette's career. Based on pictures that Gillette took dating back to the 1940s, the volume documents ranching, family, and small-town life, including downtown activities on Saturdays: the café, drug store, barbershop, city streets, and marching band and Sunday church activities: homecoming, dinner on the ground, and Bible school.

There were 240 households out of which 35.0% had children under the age of 18 living with them, 57.5% were married couples living together, 11.7% had a female householder with no husband present, and 26.7% were non-families. 24.6% of all households were made up of individuals and 16.3% had someone living alone who was 65 years of age or older. The average household size was 2.53 and the average family size was 3.03. 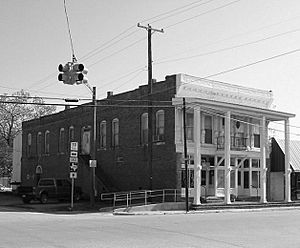 Charles Rufus Rich (1857–1945) completed this building in 1906 as a combination ground floor general mercantile store and second floor residence. A native of Texas, Rich had opened his business in Lovelady in the early 1900s.

The climate in this area is characterized by hot, humid summers and generally mild to cool winters. According to the Köppen Climate Classification system, Lovelady has a humid subtropical climate, abbreviated "Cfa" on climate maps.

All content from Kiddle encyclopedia articles (including the article images and facts) can be freely used under Attribution-ShareAlike license, unless stated otherwise. Cite this article:
Lovelady, Texas Facts for Kids. Kiddle Encyclopedia.