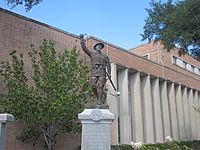 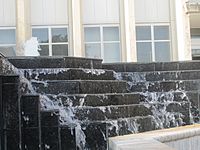 Angelina County is a county located in the U.S. state of Texas. As of the 2010 census, the population was 86,771. Its county seat is Lufkin. The county was formed in 1846 from Nacogdoches County. It is named for a Hasinai Native American woman who assisted early Spanish missionaries and was named Angelina by them. Angelina County is a wet county as of November 2006 wet/dry election. In November 2007 the small community of Burke was the only city in Angelina county to return to dry status.

The county's first Anglo settlers were what John Nova Lomax described as "Scotch-Irish backwoods folk." Cotton farmers and slaves did not come to Angelina County because it had poor soil. Lomax added that "Culturally, the county was less moonlight-and-magnolias Dixie than a little pocket of Appalachia, where pioneers, often from similarly hardscrabble areas of Georgia, Alabama and Mississippi, wanted nothing more than to carve homesteads out of the Piney Woods and river thickets, farm a little, maybe raise a scraggly herd of tough cattle to drive to market in New Orleans." Lomax added that "[t]hey also wanted to brew up a little whiskey and subsist on the bass, catfish and perch they hauled from the Neches and Angelina rivers and whatever they could trap and shoot on dry land."

Settlement was still thin when Texas won its independence. Angelina County was organized on April 22, 1846, when Nacogdoches County was divided. The first permanent settler after the county was formed is thought to have been George W. Collins. The population increased quickly thereafter due to the good farming land and to the rivers, which made steamboat transportation possible. The population reached 1,165, 196 of whom were slaves, in 1850. The first county seat was Marion; successively, Jonesville became county seat in 1854, Homer in 1858, and Lufkin in 1892. Lufkin was favored by the route of the Houston, East and West Texas Railway (now the Southern Pacific), which had been built in 1882 from Houston to Shreveport.

Angelina County was settled predominantly by natives of the southern United States, some of them slaveowners who established plantations in their new Texas home. Large plantations were owned by the Stearns, Oates, Kalty, Stovall, and Ewing families. However, many Angelina County farmers were relatively poor men who owned no slaves. In 1847 slaves numbered 154, out of a total population of 834. In 1859 the number of slaves had grown to 427, valued at $269,550, and the total population was 4,271. Cotton culture, however, occupied only 2,048 acres of county land in 1858, a relatively small area for East Texas. Between 1850 and 1860 improved land in the county increased from about 3,000 to about 16,000 acres.

In 1861 Angelina County was the only county in East Texas, and one of only a handful of other Texas counties, to reject secession. This election result was startling when compared with that of Angelina County's neighbor to the immediate south, Tyler County, which supported secession by a 99 percent vote. Angelina County had also given the Constitutional Union party candidate, John Bell, a strong minority vote in the 1860 election. Two companies of county men were organized to fight in the Civil War, but they saw only limited action; only nineteen Angelina County men lost their lives in the war, and no Union soldiers entered the county before 1866.

US 59 goes through Angelina County. It is planned to be upgraded to interstate standards as part of the planned Interstate 69.

All content from Kiddle encyclopedia articles (including the article images and facts) can be freely used under Attribution-ShareAlike license, unless stated otherwise. Cite this article:
Angelina County, Texas Facts for Kids. Kiddle Encyclopedia.