Polk County is a county located in the U.S. state of Texas. As of the 2020 census, its population was 50,123. Its county seat is Livingston. The county is named after James K. Polk.

The Alabama-Coushatta Indian Reservation of the federally recognized tribe is in Polk County, where the people have been since the early 19th century, after having been forcibly evicted from the Southeast. The 2000 census reported a resident population of 480 persons within the reservation. The tribe reports 1100 enrolled members. 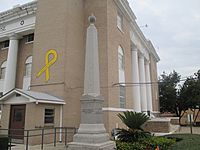 Polk County, named for His Excellency James Knox Polk of Tennessee, President of the United States, was by act of the First Legislature of the State of Texas, approved on March 30, 1846, created out of Liberty County and embraced that portion thereof known and designated as the "Northern Division" of said Liberty County. It was one of the first of a series of 23 counties, formulated, constituted and established by the State of Texas, after annexation with the United States.

West Livingston has the Livingston Municipal Airport, operated by the City of Livingston.

The county is in the district for Angelina College. Polk County College / Commerce Center was completed in 2013 and is located on the U.S. Highway 59 Bypass. Angelina College offers advanced curriculum study and technical training at this location. The facility provides public auditorium space and may be used as a mass shelter in a disaster event .

All content from Kiddle encyclopedia articles (including the article images and facts) can be freely used under Attribution-ShareAlike license, unless stated otherwise. Cite this article:
Polk County, Texas Facts for Kids. Kiddle Encyclopedia.