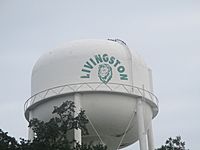 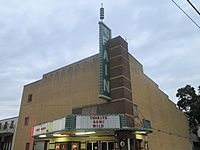 The Polk County Courthouse in Livingston 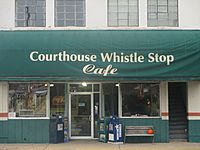 The Courthouse Whistle Stop Cafe is located across from the courthouse in downtown Livingston. 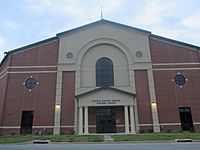 The Alabama-Coushatta Indian Reservation is just to the east of Livingston. The 2000 census reported a resident population of 480 persons within the reservation.

According to the United States Census Bureau, the town has a total area of 8.4 square miles (22 km2), of which, 8.4 sq mi (22 km2) of it is land and 0.12% is covered by water. However, the town of Livingston is about 10 mi (16 km) east of Lake Livingston, which is the largest drinking-water reservoir in the state of Texas.

The zip code 77399 is used exclusively by a mail service called Escapees for those who are signed up with the service.

In the 2010 Census, Livingston lost 1.8 percent of its population.2010 Census for Livingston, Texas

Greyhound Lines operates the Livingston Station at the Super Stop Food Mart. The city's airport, Livingston Municipal Airport (LMA) is located to the southwest of the city. It is classified as a general aviation facility serving private aircraft.

Lake Evelyn is within the borders of Camp Cho-Yeh, which began operation in the 1940s continues to function as a summer camp and retreat center to this day. Cho-Yeh means, 'land of tall pines' and was labeled that because of the large pine trees on the property.

All content from Kiddle encyclopedia articles (including the article images and facts) can be freely used under Attribution-ShareAlike license, unless stated otherwise. Cite this article:
Livingston, Texas Facts for Kids. Kiddle Encyclopedia.